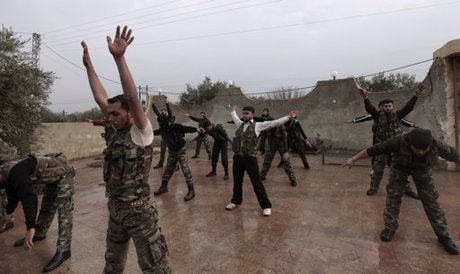 The newly formed supreme military council of the rebel Free Syrian Army has promoted its leader to the rank of general, in the first decision since its creation this month.

"The first decision of the supreme military council, taken on December 26, is to promote Brigadier Selim Idriss to division general," Colonel Abdel Jabbar al-Okaidi, head of the rebel military council in the northern province of Aleppo, said in a video message posted on the Internet late on Friday.

Idriss, a military engineer who defected from the Syrian army in July, had been elected chief of staff for the rebel military council following its formation in mid-December.

The council was created to unify the ranks of the rebellion and falls under the National Coalition, which has been widely recognized by the international community as the legitimate political representative of the Syrian people.

Idriss is responsible for commanding the wide patchwork of rebel forces, with the notable exception of the powerful Al-Nusra Front, a jihadist group blacklisted by Washington as a "terrorist" organization.

The uprising erupted in March 2011 with peaceful democracy protests, inspired by the Arab Spring. It transformed into an armed insurgency when the government began a bloody crackdown on dissent.

In 21 months, the violence has killed more than 45,000 people, the majority civilians, according to the Britain-based Syrian Observatory for Human Rights, which relies on a network of activists and medics on the ground.

What is the going salary for this promotion?

From the people who brought you the new Libya. But they learned from that adventure to only hire dependable operatives, who will make Syria a failed state , so that Israel can rest easy in its racist bed, and Lebanon can rest easy on its racist carpet next to that bed.

israel already rests easy on its bed thanks to bashar who protects the syrian israeli border...

Laugh all you want. Your master ASSad is falling. Wadi Deif will fall very soon and the drive south will begin.