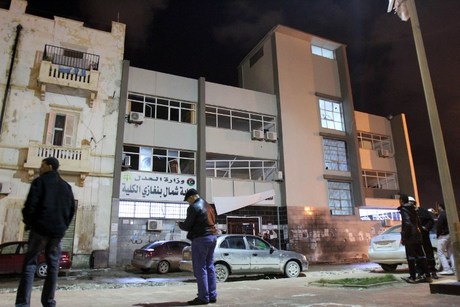 An improvised bomb exploded outside the headquarters of the public prosecutor in the Libyan city of Benghazi causing material damage but no fatalities, a security source said Monday.

"Initial evidence suggests the device was a suitcase packed with high yield explosives (TNT)," an investigator at the scene told Agence France Presse, adding that there were no casualties.

The overnight blast marked the third attack on the site in 2012, he said.

It damaged the front of the recently renovated building, which once held the people's court, a special tribunal created by the former regime of Moammar Gadhafi to crack down on opponents, particularly Islamists.

The bomb also punched a hole in the ground and shattered the glass of adjacent vehicles and properties.

December marked a tumultuous month for Benghazi, cradle of the 2011 NATO-backed uprising that toppled the Gadhafi regime and ended in the killing of one of the region's veteran dictators.

A spate of attacks targeting police stations claimed the lives of seven officers this month and pushed the chief of staff to send reinforcements to bolster security there.

In 2012, Libya's second city witnessed a series of assassinations targeting security officials and judges, many of whom had served under the previous regime.

Benghazi has also emerged as a hub for jihadist groups, including militants who killed ambassador Chris Stevens and three other Americans in a September 11 attack on the U.S. consulate.

In a separate incident late Saturday, an explosion rocked a Coptic church near the city of Misrata, killing two Egyptians and wounding two others, according to local and diplomatic sources.