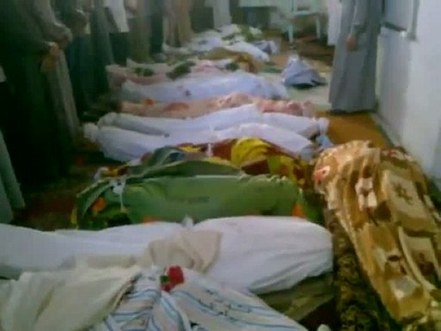 Thirty tortured and disfigured bodies have been found in the northern Damascus neighborhood of Barzeh, the scene of regular clashes between regime troops and rebels, a watchdog said on Monday.

"Thirty bodies were found in the Barzeh district. They bore signs of torture and have so far not been identified," said the Syrian Observatory for Human Rights, which relies on medics and activists on the ground in compiling its tolls.

The Syrian Revolution General Commission, a grassroots network of anti-regime activists, estimated that there were 50 bodies, adding that "their heads were cut and disfigured to the point that it was no longer possible to identify" them.

These reports could not be verified independently because of restrictions on the international media by the Syrian authorities.

The gruesome discovery was made on Sunday, the day U.N. and Arab League peace envoy Lakhdar Brahimi said he has a plan to end the conflict that could be acceptable to world powers.

The Syrian conflict, which erupted in March 2011, has claimed more than 45,000 lives, according to Observatory estimates.

On Sunday itself 160 people were killed nationwide -- 78 civilians, 41 soldiers and 41 revels, the Observatory said.

Look at what Hezbollah's Shabiha are doing.... they'll never get to see the new year and the new free, democratic, Syria.