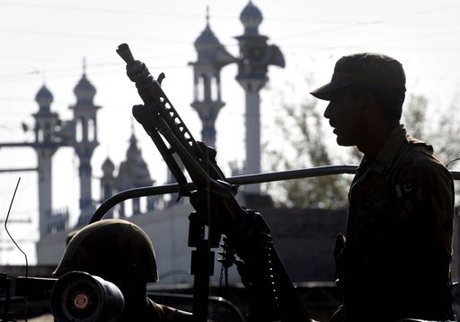 The bodies were found on the side of the road in Peer Kaley village in North Waziristan, a stronghold of al-Qaida-linked groups, 10 kilometers (six miles) east of the district's main town of Miranshah.

"Unidentified people threw away these nine bodies. No one knows who killed them," a security official based in Miranshah told Agence France Presse.

Local residents confirmed that the bodies had been discovered and a second security official in Miranshah said the identity of the dead was yet not known.

But Ehsanullah Ehsan, a spokesman for the umbrella Taliban faction in Pakistan, told AFP that all nine were Taliban fighters and accused government security forces of killing them.

"We are proud of their martyrdom, soon we will take revenge for this killing," he told AFP from an undisclosed location.

Officials on Sunday said they had found the bodies of 21 tribal policemen who had been kidnapped by militants near the northwestern city of Peshawar.

Pakistan's seven northwestern tribal districts are rife with homegrown insurgents and are strongholds of Taliban and al-Qaida operatives.

Islamabad says more than 35,000 people have been killed as a result of terrorism in the country since the 9/11 attacks on the United States.