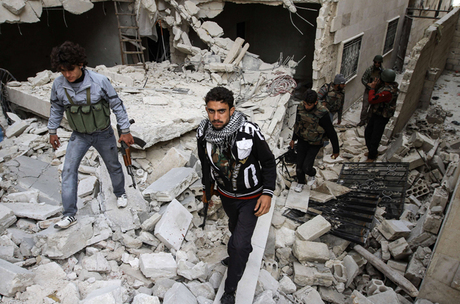 Syria's government on Monday welcomed any initiative for talks to end bloodshed in the country, after U.N.-Arab League envoy Lakhdar Brahimi said he had a peace plan acceptable to world powers.

The regime's stand, expressed by Prime Minister Wael al-Halaqi, came amid a flurry of diplomacy led by Brahimi to find ways to end the 21-month conflict.

But the violence still raged, with activists reporting the gruesome discovery of dozens of tortured, headless corpses in a Damascus district, adding that nearly 90 percent of the 45,000 people killed so far died in 2012.

"The government is working to support the national reconciliation project and will respond to any regional or international initiative that would solve the current crisis through dialogue and peaceful means and prevent foreign intervention in Syria's internal affairs," Halaqi told parliament.

He said the revolt against President Bashar Assad's regime must be resolved only by the Syrian people, "without external pressures or decrees".

Halaqi said the country was "moving toward a historic moment when it will declare victory over its enemies, with the goal of positioning Syria to build a new world order that promotes national sovereignty and the concept of international law".

Brahimi said Sunday he had crafted a ceasefire plan "that could be adopted by the international community".

The proposal involved a ceasefire, the formation of a government, an election plan, and was based on an agreement world powers reached in Geneva in June.

The opposition has already rejected that accord, and insists Assad must go before any dialogue can take place.

Russia and China have so far vetoed three U.N. Security Council draft resolutions seeking to force Assad's hand with the threat of sanctions.

The violence has escalated, with activists reporting the discovery of 30 tortured bodies in a flashpoint district of Damascus, while a gruesome video emerged of a separate slaying of three children in the capital.

"Thirty bodies were found in the Barzeh district. They bore signs of torture and have so far not been identified," said the Britain-based Syrian Observatory for Human Rights.

The Syrian Revolution General Commission activist network gave a higher estimate of 50 bodies, saying "their heads were cut and disfigured to the point that it was no longer possible to identify" them.

The video posted online by activists showed the bodies of three young boys with their throats slit open and hands bound behind their backs. Their bodies were discovered on Monday in Jubar.

The Observatory also reported the killing of the boys, who activists said were kidnapped the day before at a checkpoint on their way home from school.

Fighting erupted in Daraya as army reinforcements massed in the contested town where more than 500 people were reportedly killed in the conflict's bloodiest massacre in August.

In central Syria, the army shelled the town of Halfaya in Hama province, where an air strike on a bakery last week killed 60 people, and Houla in Homs province, where pro-regime militiamen are suspected of killing more than 100 people in May in another major massacre.

The Observatory said nearly 90 percent of the 45,000 people killed in the conflict died in 2012, putting this year's toll at 39,362 people, mostly civilians.

The uprising began in March 2011 with peaceful protests inspired by the Arab Spring, but morphed into an armed rebellion following a brutal government crackdown.

The sharp increase in fatalities was due to a fierce escalation in the methods of crackdown by the regime, which included air raids on densely populated areas, said the Observatory.

Though rebels now hold vast swathes of territory and have struck the heart of Damascus, the regime has so far stood firm despite Western predictions of its imminent fall.

May you never see peace and may more more die in the new year.
Long Live The Syrian Civil War!

resistance do you have anything to back up this article? or is a simple sentence from half way around the world enough proof for you.

because in that case, i have plenty of those

The ASSistance Farsi talking out of his rear as usual. Wahhabi this wahhabi that......hope you come out with something new and original next year you moron.....aka schizo Farsi BSThrower/Motormouth!

while you re at it give the links also of bashar tanks crushing under their caterpillar dead syrian people... you know bashar the good one you support...

The longer this civil war the worse the outcome ... yet Moaz al-Khatib, Syrian National Coalition for Opposition and Revolutionary Forces president wants no part of any talks ... the Brotherhood has spoken as the face of the Zionist-GCC war on secular-nationalist Muslims and Shiites.

Moaz alKhatib is not part of the "Brotherhood". The only evil in Syria is the one who has stolen power for over 40 years and has wreaked havoc in Lebanon and supported Lebanon's militias against each other and fueled the civil war. ASSad needs to go, end of story.

Of course Khatib is Brotherhood ... common knowledge ... He is also a geophysics engineer employed by oil companies ...

Khatib is a disciple of Qatar-based Egyptian televangelist cleric Yusuf al-Qaradawi. He referred to al-Qaradawi as "our great Imam". Al-Qaradawi has long had a prominent role within the intellectual leadership of the Muslim Brotherhood.

Of course you know that the just blessed (NATO_GCC)Syrian National Coalition is dominated by Muslim Brotherhood members.

sheikh alQaradawi is THE most prominent Imam in the Sunni world so does that mean that all Sunnis now are "brotherhoo"? (this is where you are drawing your own conclusions and making stuff up)

Cleric Yusuf al-Qaradawi belongs to, is a member of ...

accordion when did I say that? You are inflicted with mckinl's disease of making stuff up as well? go take your crusade elsewhere.

who do you mean by "secular-nationalists" by the way? Baath? If that is what you mean that is some of the stupidest talk ever. Baath has been the absolute bloodiest regime in the region.

Secular in terms of moderate Muslims and different sects. Nationalist in terms of being loyal to their countries and not believers in the GCC Zionist neoliberal petrodollar banking system.

The Brotherhood is a neoliberal organization sponsored and supported by US-GCC money and power. Neoliberal is short hand for the imperial zionist banking cartel that controls the WTO, IMF, BIS and the World Bank.

You are very naive ... The countries you claim to want to live are repressive. Of course Assad was a dictator and repressed his people as well. I have never represented Assad in any other light ...

Hopefully by exposing the forces behind the civil war there will be accommodation and representation for Syria's many religions and cultures. Hopefully the truth will moderate the outcome for the better.

Originally, yes, it was a popular uprising but the uprising was soon high jacked by salafist foreigners intending an Islamic state for Syria.

Assad was truly brutal and should be gone however don't believe for one minute that the next government won't be repressive as well. Egypt is a good example of how a popular uprising was stolen ...

Egypt's revolution was not stolen, they had elections and the people chose whom and what they wanted. The same thing will happen in Syria, there will be free elections and people will choose what they want. Stop making stuff up in your fantasy world.

can you tell us facts that make you say they "intend" to build an islamic state? who said that? who declared that? when? where?

or is it because otv and elmanar tell you so to make you frightened and defend the democratic baath regime?

Look at Greece my friend ... Debilitated by debt they are now slashing government spending and selling public works...

Lebanon's national debt as a percentage of GDP than Greece's was when their crisis started.

it is you that doesn't understand, he's the most prominent sunni cleric in the world. so what if he belongs to the brotherhood does that mean all Muslims do? What do you know about the Syrian brotherhood by the way? Other than what ASSad has told you? I can't stand ignorance....

It is betrayal to the martyrs that fell for Syria's freedom to hold talks with ASSad in power.

"Syria Will Respond to Any Talks on Ending Conflict"

ignoring is a response--of course, they haven't given anyone any reason to trust them either or their main backers, Iran and Russia.

Assad the dog must be killed first...

No doubt he must be removed from the region as should the scums of the world HA & Iran. No room for regressed religious terrorists on this planet!

lolololol............case & point >>>. When the ASSistance shows up within minutes the Farsi BSthrower appears. Your such a pathetic low life schizo Farsi. Yallah let's see which of his alias will show up now....Motormouth....Kaa Kaa Karim. Mustool and a loner!

FT, it is always funny to see idiots that support hizbocrap speak out against what they perceive to be "fundamentalist" Islam...

so true mohammed_ca! some are not afraid to appear ridiculous but hezbollah is no fundamentalism for them ! lol! it is a pure secular and democratic party never using islam to spread their propaganda!

ba3d shwy they're going to make it seem like nasrocrap was elected and that there was a referendum on whether or not hizbocrap militia should have weapons..

March 14, my warriors and only hope for a free Syria (and we shall talk about a free Lebanon subsequently), what's wrong with this PM? Isn't there anyone who can tell him that time is running out on the Assad regime? What the heck? The regime has only a few hours left of its life as Dr. Arreet 7akeh had been confirming to his followers at the Symposium of Drs. Arteena Satleh that the regime MIGHT fall in 2012!!! It really seems like time is running out on... well... duh... umm... Drs. Arreet 7akeh and Drs. Arteena Satleh? Happy New Year and theyre is always 2013 and then 2014 and then 2015 and then... You get the idea about the possibily of the Syrian regime falling.

funny how FPMers are now becoming fierce defenders of the baath regime they called terrorist before! time changes and they just go where the wind brings them money and power! lol !

hey mckinl, who are you or anyone else to decide what is good for the syrian people? who are you to label them this or that. if they want the muslim brotherhood then who are you to say no? let the devil bashar leave and let them democraticaly elect whomever..

cheers flamethrower to you and hassoune for the new year... double dare you to go drink to hassounes health in dahieh..and please find me one person in hizballah who is not shiite... secular he says... hahahahahaha joke of the year thrower joke of the year.

it's up to Syrians to vote for whom they want not you.