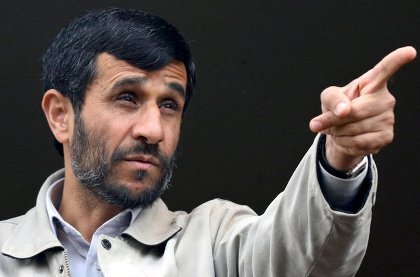 Iranian President Mahmoud Ahmadinejad has again spoken out against the use of pressure to impose Islamic values on people, especially university candidates, media reported on Monday.

"You cannot impose things by issuing decrees and directives -- a choice imposed by force has no value whatsoever," Ahmadinejad said in a speech on Sunday.

He also criticized criteria on the selection of university candidates, citing the case of a student denied university admittance in the 1980s because he had shaved. Being unshaven in Iran is a sign that you are a good Muslim.

Ahmadinejad also mentioned another case of a girl refused a university place because she had "talked to a boy in the street and had her headscarf back an inch," thereby showing her hair.

He said that after he intervened in both cases they were granted places.

Ahmadinejad also denounced some of the questions posed to candidates during interviews for government jobs.

"We have asked people if they drank alcohol or have illicit sexual relations. This is an insult and goes against religion," he said.

Ahmadinejad, whose second and final presidential term ends in 2013, has repeatedly drawn the ire of ultra-conservative religious figures in the Islamic republic by advocating a more liberal view of Islam, criticizing in particular the use of force to compel women to cover their hair.

Hopefully Iran will elect a more astute president next year. Ahmadinejad has been an unmitigated disaster for Iran. Everyone knows Iran has a plutocractic religious regime that represses its' people. Ahmadinejad pronouncements only call attention to this fact. Iran should begin a strategic retreat that would leave her enemies without an easy target.

Iran has completely misplayed its' foreign policy position to the point where it has no real allies left. Granted Iran is well within its rights to pursue its policies but taking on the NATO-GCC cabal so aggressively is suicidal. No other countries can afford to openly support Iran leaving Iran alone and vulnerable rather than leading a counter front to the neoliberal onslaught of the NATO_GCC economic imperialism.

I think, now would be a good time for all our Avatars to be the Lebanese Flag or similar emblems.

Mine will always be the anti filthy militia

Seriously?! You believed him now?! He represents the tip of hypocrisy as he never practices what he preaches. By the way, I agree with you about the KSA thing, but my friend, they are all the same; 2 faces for the same ideology. As a fellow Lebanese, I beg of you not to be too shallow.

so, why does he have a beard?

Don't forget he has been in trouble with the demon ayatollah. The ayatollah will slap him down.

Three points about Iran: They have the second most sex change operations for men in the world, they have huge heroin problems, and they are the leader for quickie hump hump mariages for a few hours sanctioned by mufties.

Don't get so pious about them.

plus : human rights don t exist, christians are dhimmis, no democracy, islamic law like in KSA....

My experience with many Iranians is that they've come to detest Islam in general, probably from these 'imposed' virtues that Ahmadinejad notes. Anyhow, let's see if his predecessor is going to be any more liberal. I am predicting the end of wilayet al faqih in the next 3-5 years.

good to know you are Lebanese first ,everyone can choose who to support who they choose ,the important thing is mutual respect