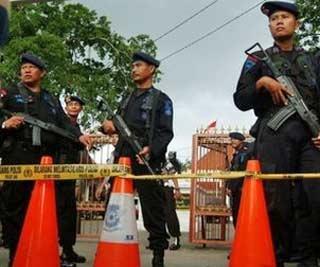 The two -- Syamsuddin alias Aswah alias Abu Uswah, 34, and Ahmad Kholil alias Hasan, 35 -- were carrying a handgun and grenades when they were shot at the Hasanuddin University campus in the South Sulawesi capital Makassar.

They had "tried to pull out their gun", Amar told reporters.

"In the process of arresting the men, the police were forced to shoot to immobilize them," he said.

Amar said the men were linked to the country's most wanted terror suspect, Santoso, who police believe leads the militant group and set up a paramilitary training camp in the Poso mountains.

The two men had been police targets since November when members of the group were arrested for throwing a pipe bomb at the South Sulawesi provincial governor while he was giving a speech, Amar said.

Police have said Santoso's group is believed to have trained scores of young militants to assemble rifles and launch guerrilla attacks against police officers.

Police have beefed up security in the area since late last year after two police officers investigating the camp were found dead and buried in a hole with their throats slit, and several small bomb plots were subsequently foiled.

Poso was the site of sectarian violence between Muslims and Christians between the late 1990s and mid-2000s that left thousands dead.

Indonesia was rocked by a series of deadly terror attacks targeted at Westerners last decade, with most -- including the 2002 Bali bombings that killed 202 people -- blamed on the al-Qaida-linked group Jemaah Islamiyah.

But a crackdown on terrorism has weakened key militant groups and only low-impact attacks have been carried out in recent years by networks targeting law enforcement officers.