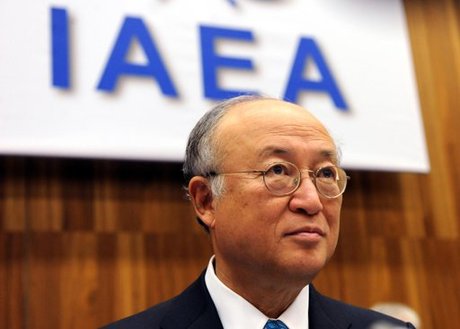 The U.N. nuclear chief Friday said he was not hopeful of striking a deal with Iran next week that would see Tehran address allegations of past nuclear weapons research and grant access to controversial sites.

Yukiya Amano, director general of the International Atomic Energy Agency, said the outlook for an agreement between IAEA officials and their Iranian counterparts when they meet on January 16 was "uncertain".

His remarks came after Iran Wednesday poured water on the U.N. watchdog's hopes of securing access to the Parchin military complex where suspected past research into atomic bomb triggers might have been carried out.

Iran said it would not agree to any inspections beyond those of declared nuclear sites required by the Non-Proliferation Treaty.

For the past year, the IAEA has been trying to reach agreement with Iran on a "structured approach" -- jargon for a deal whereby Iran would grant access to sites, scientists and documents involved in its alleged weaponization efforts.

Foremost among those is the Parchin military base outside Tehran, where the IAEA suspects Iran may have conducted past tests of conventional explosives that could be used to detonate an atomic bomb.

Iran denies seeking or ever having sought nuclear weapons, and rejected the alleged evidence outright in a series of meetings with the IAEA last year.

"Negotiations with Iran are very difficult," Amano told a press conference in Tokyo.

After a visit to Tehran last month, IAEA chief inspector Herman Nackaerts said he was confident an agreement could be finalized at next Wednesday's talks and that access to Parchin would be "part of" it.

However, Amano noted, that despite "measured progress" in the December talks, the two parties fell short an agreement.

"However, we cannot say anything about the outlook for certain, if you ask me whether we are optimistic about it."

Much of the information on the alleged weapons research comes from foreign intelligence agencies, including from arch foe Israel, the Middle East's sole if undeclared nuclear-armed state, which has threatened to bomb Iran.

Iranian foreign ministry spokesman Ramin Mehmanparast had hinted that access might be granted to Parchin, but only once a "comprehensive agreement" with the watchdog has been reached.

Next Wednesday's meeting comes ahead of the first talks since June between Iran and the five permanent members of the U.N. Security Council -- the U.S., China, Russia, Britain and France -- and Germany, possibly later this month.

These efforts are focused less on the past and more on Iran's current activities, in particular Tehran's capacity to enrich uranium to fissile purities of 20 percent.

Such material can be used for peaceful purposes -- Iran says it is for producing nuclear medicines for diagnosis of cancers and other diseases -- but also when further enriched to 90-percent in the fissile core of a nuclear weapon.