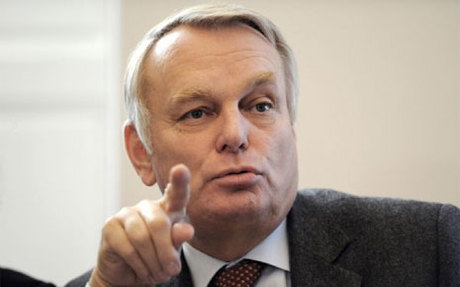 The French and Malian troops are currently "around Gao and soon near Timbuktu," he said in a speech to the French community of Santiago.

Ayrault, who is attending a two-day summit of Latin American and European leaders opening later Saturday, reiterated that the French troops backing Malian government forces had no intention of staying.

"The objective is that the African multinational force being put together be able to take over, and that Mali be able to begin a process of political stabilization," he said.

A fabled caravan town on the edge of the Sahara desert, Timbuktu was for centuries a key center of Islamic learning and has become a byword for exotic remoteness in the Western imagination.

Today it is ruled by Islamist militants who have been razing its world-heritage religious sites in a destructive rampage that the U.N. cultural agency has deplored as "tragic."

French-led troops on Saturday seized the airport and a key bridge serving the Islamist stronghold of Gao in a stunning boost to a 16-day-old offensive on al-Qaida-linked rebels holding Mali's vast desert north.