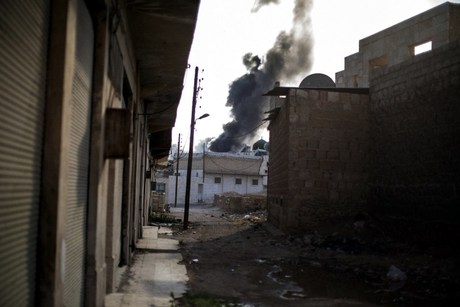 A regime warplane killed 16 people, half of them children, in a strike on the city of Manbij in the northern province of Aleppo on Saturday, the Syrian Observatory for Human Rights said.

The strike came as the watchdog reported seven people killed in air raids on the Aleppo city of al-Bab, and that similar strikes hit Aazaz, only seven kilometers (four miles) south of neighboring Turkey, where a Patriot missile battery went operational on Saturday.

Video footage filmed by an activist and posted on YouTube showed scenes of pandemonium in Manbij, as dozens of men rushed to the bombed out ground floors of multi-storey buildings to dig out people buried beneath.

A grief-stricken woman wailed as she stumbled from the scene holding her child.

A man, his jacket covered in dust, screamed as he ran away carrying a child covered in blood while another bolted past holding a toddler, who could be seen wiping tears off his ash-covered face.

"Bashar is a dog! Bashar is a dog!" shouted a young man facing the camera, which panned to show a chaotic scene of cars reduced to scrap metal, massive trucks overturned and an entire neighborhood covered in rubble and dust.

Crowds of teenagers stared in shock at destroyed apartment buildings.

The footage could not be immediately verified.

The air raids in Aleppo province came as warplanes targeted rebel positions in neighboring Raqa province, Hama province in the center, Daraa province in the south and an eastern district of Damascus, the Observatory said.

In northern neighbor Turkey, NATO said one of six batteries of Patriot missiles deployed to protect against a spillover of the 22-month conflict went into operation.

The battery, provided by The Netherlands, would "help to protect the (southern) city and people of Adana against missile threats," it said, adding the other five batteries should be ready in the coming days.