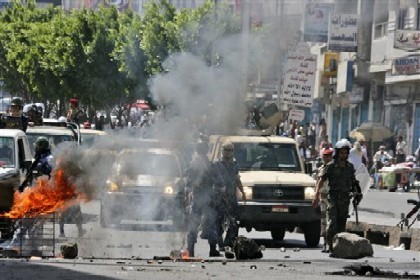 A suicide car bomb at a checkpoint in central Yemen killed 11 soldiers on Monday, Saba state news agency said, as the army led an offensive on Al-Qaida militants suspected of holding European hostages.

"Eleven soldiers were killed and 17 others were wounded in the attack," Saba said.

The attack targeted a checkpoint manned by members of a battalion of the elite Republican Guards on the road between Rada and Manaseh, where the army military operation was taking place, according to tribal sources.

Elsewhere in the same province, an Al-Qaida ambush killed a soldier and wounded two others, according to one tribal source.

Another three people were killed in an army operation launched late on Sunday against Al-Qaida-linked militants suspected of holding an Austrian and two Finns hostage in Manaseh, in Bayda province, tribal sources said.

The army is hunting three militants accused of holding the European hostages and who have refused to surrender despite mediation efforts.

The three men -- brothers of Tarek al-Dahab, an Al-Qaida leader killed in a February 2012 attack -- deny they are holding the hostages.

"The three European hostages are not in Manaseh. They might still be in Marib," Al-Qaida's eastern stronghold, a tribal source in contact with the militants told AFP.