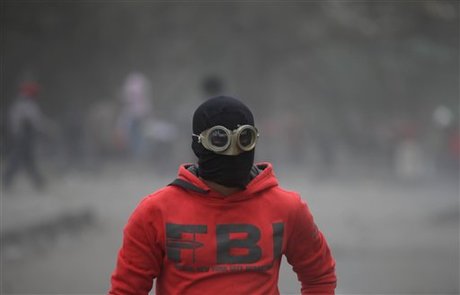 Egyptian authorities on Wednesday detained suspected "Black Bloc" members as they protested an order by the public prosecutor to arrest anyone from the shadowy opposition group, Agence France Presse reported.

Riot police took into custody at least four protesters, who were wearing black masks, outside the public prosecutor's office in central Cairo, the journalist reported.

Presenting themselves as the defenders of protesters opposed to Morsi's rule, the Black Bloc reportedly models itself on anarchist groups of the same name in Europe and the United States.

On Tuesday, Ibrahim's office said: "Inquiries have shown that the Black Bloc is an organized group which carries out terrorist actions."

The prosecutor urged "citizens to arrest anyone suspected of membership in this group and hand them over" to the army or the police.

In a video posted on YouTube, the militants say they want to "confront the regime of the fascist tyrants" -- a reference to the Muslim Brotherhood of which Morsi hails.

Photographs showed them celebrating around a police armored vehicle in flames in the middle of Tahrir Square this week, waving V-for-victory signs.

The origins and leadership of the group is shrouded in mystery and the extent of its membership unknown.

At least 54 people have died in the latest wave of violence, which first erupted on Thursday.