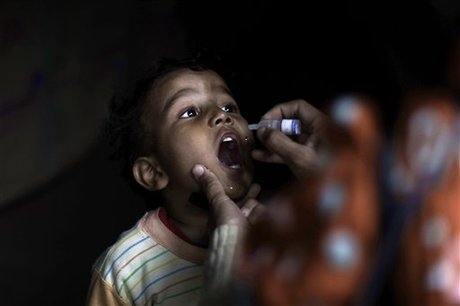 A bomb Thursday killed two polio vaccination workers in Pakistan's northwestern tribal region, officials said, the latest in a series of such attacks which have now killed 19 in two months.

There has been no claim of responsibility for any of the killings. But the umbrella Taliban faction last year banned polio vaccinations in the tribal region of Waziristan, condemning the campaign as a cover for espionage.

"The two-men team was visiting Mali Khel village in upper Kurram tribal region when an improvised explosive device planted along the roadside went off, killing them on the spot," Jawad Ali, in charge of the campaign in Kurram, told Agence France Presse.

He said the team had been visiting different areas which were not covered by a three-day campaign that ended Wednesday.

Kurram is part of the semi-autonomous tribal belt near the Afghan border where Taliban and al-Qaida-linked militants have carved out strongholds to plot attacks on Pakistani, Afghan and Western targets.

It is also rife with sectarian violence between Shiite and Sunni Muslims.

Pakistan, Afghanistan and Nigeria are the only countries in the world where polio is endemic. But rumors about vaccines being a plot to sterilize Muslims have long dogged efforts to tackle the highly infectious disease.

On Tuesday a policeman was shot dead while guarding two female polio vaccination workers in the northwestern district of Swabi.

On January 1 seven staff members of a charity involved in education and health projects, including polio vaccinations, were killed in the same district.

And in December gunmen killed nine health workers carrying out polio vaccinations in Karachi and the northwest.

Polio cases in Pakistan hit 198 in 2011, the highest figure for more than a decade and the most of any country in the world, according to the U.N.