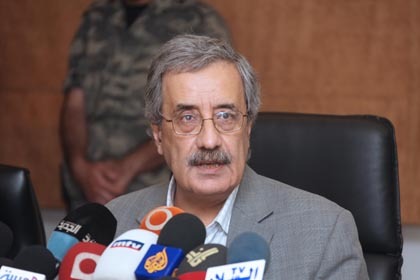 Caretaker Telecommunications Minister Charbel Nahhas said that the telecom ministry employees in Beirut’s Adliyeh building were banned from entering the rooms where the equipment donated by China were located.

Nahhas told As Safir newspaper on Monday that “Ogero officials changed the magnetic card codes that are used to open the doors.”

The minister noted that Ogero’s General-Director, Abdel Monhem Youssef, is holding the new cards to himself.

“The ministry was unable to check the third GSM network that the Internal Security Forces’ Information Branch was operating in cooperation with Ogero without the knowledge of the ministry, for unknown reasons,” he said.

Nahhas confirmed that he filed an official complaint to the government commissioner to the military court against ISF chief Maj. Gen. Ashraf Rifi and whoever turns out to be an accomplice in the “armed disobedience” and “rebellion” against orders by Caretaker Interior Minister Ziad Baroud to clear the building of ISF members.

“We are waiting from the general prosecutor to work on the issue,” Nahhas told the newspaper.

enough mr nahas with the story you must be proud of your self yes you want to give it to hizballah we all know that and yes you did all this to show that you are so concerned but I have a question for you why now??? and why you couldn't ask for a cabinet meeting you know you are breaking the law and you did wait till now so you can say ogero is a problem you just want to be free to do what ever you like without any one pointing what you are doing and allowing hizballah to see the data you should get aressted for that alone but where is the law in a country have Mr aoun and you as MP and minister good bye Lebanon

Nahas is a perfect fit in a Syrian cabinet. His street manners, vindictiveness, threats, confrontational posture is in sync with Aoun and Nassrallah. This will cause many decent Lebanese to emigrate disgusted by these destructive personalities that have transformed Lebanon from the shining city on the hill with its roots in freedom and democracy; to a copy of Assad/Ahmadinajad nuts. Never understood why any person with half a brain can support Aoun or Nassrallah, until I realized in our region some people still support tyrants like Khadaffi or Assad... go figure!

Another act of lawlessness in Lebanon looked at in a political way. Who cares who Nahas or Rifi represent. What Ogero did is wrong! What Rifi did is wrong!

If Nahas did it now, before or later does not justify the conduct of Ogero, which in my opinion is the worst entity we have in this broken country.

Well to the people who reported let me ask you now what have they done with it????? lol your short view that Hezbollah don't want any one to be able to know any thing about there moves and so fare they have it now why it is not working they are all the same what ever Syria order them to do they do wake up people this is not Lebanon any more it is Iran and Syria that's why Lebanese left the country and they are all at the embassies waiting for visas thanks to aoun there is more then 60% of Christians left the country and thx to Nassralah 70% of sounat and chi3at has left who iss going to remain in this country after all.