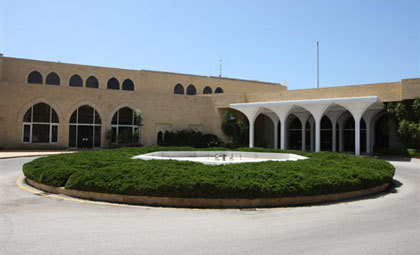 The following is the lineup of Miqati’s 30-member government:

walid jumblat will decide if this gvt have confidence.

WOW. That was so fast. They could have done it 5 months ago.
HA deployed all over lebanon and was ready to take over the country.
Letters or warnings of assasinations started arriving to m14 people.
Most of them now are out of the country.
Now we know who was delaying the formation of the gov.
What next? The confidence. . Yes they will get it. every deputy got a letter too.
they are going to give the confidence. Or else. hahahha . The syrian boots are back on their necks. What an Fnnnn joke.
Lebanon needs a coup by the Army. Alas the army has no balls.
I see no hope as long as these people are in charge.
Asta la vista lebanon.

As I always said Here that GMA will have the share of the Lion in the new governement ! Voilà , the proof is here with a total of 11 ministers to himself appointed by him from his political bloc .

GMA is the strong man today , he has the largest parliamentary bloc in the new majority .

Congratulations to minister Nicolas SEHNAOUI , the new minister of telecoms , that becomes today the strong man in Beirut Ashrafié ..

Respect to Speaker Berry and to Hezb , for what they did , giving away a Shiite portfolio from their share to a Sunni , Minister Fayçal KARAMI . That makes 7 Sunnis ministers and only 5 Shiias ministers ..unstead of 6 .

Anyone who is not familiar with the definition of a "sore loser" should read the post by lebman.

Irslan just resigned and Berri isn't happy about this government!

Lebman you know you are talking out of your *** don't you?

death at birth!
is the shortest cabinet ever formed in the world history to date?
so what now? street protests, political assassinations or a new home for the assad regime in lebanon?

good luck miqati, feel sorry for you but i guess you accepted the challenge,

really hope you survive this (literarily)

bigdigg, Actually anyone who is not familiar with the definition of a "sore loser" should listen to Arslan's lament.

Insa walid jumblatt wo insta lebnen, this is the beginning of the end of Hezbollah. Lebanon will join the Arab Spring soon. RIP Samir Kassir.

the only lebanese leader who met in damascus with bashar was walid jumblat,after 3 days of this meeting a defacto gvmt saw the light WITH 5 month of hard labour, and the only person who would "convince" esteez nabih to give a shiite seat to a sunni is bashar,so,it is a bashar gvmt ,mabrook,but the big danger is,for the first time we have 5 shiite for 7 sunnis....is it it a prelude to another changes?????????/
will this gvmt survive after bashar?

Are any of these clowns qualified?

i congratulate ourselves being a friend of us is in the cabinet of lebanon . nicola nahhas of tripoli lebanon . we are proud of you . best wishes and i hope to be orthozoxe in the cabinet . .. atiyeh atiyeh .

A dark day in Lebanese history. Miquati and Suleiman just threw Lebanon to the wolves, to the puppets of the two remaining regional tyrants, setting up Lebanon against the international community that will destroy our economy, dignity and freedom. All good and effective ministers who protected Lebanon’s freedom and sovereignty are gone (Baroud, Rahal, Khalife, Najjar, Sayegh, Mitri, Murr). They are replaced by the Basij, Kanso, Assad’s Marada and Aoun’s political mafia. Aoun understanding of reform is like Khadafi understanding of democracy. Both share same mental instability and intellectual sterility. Aoun only accomplishments were to divide Christians, attack Bkirki and moderate Sunnis, justify Hizbollah’s arms and actions, poison our relations with the West, destroy our economy, and place Lebanon under the control of Basij and Mukhabarat. The Silent Majority rejects this insulting government. Only a short time before all puppets of Assad and Ahmadinajad are brought to justice.

the mikati gvmt is a new card given to bashar in his regional play,like the golan card , the assad family played with it 40 years with what they call 'adou elsahyuni". but rest assured,the card of mikati gvmt is already burning,and
BILAD EL ARZ ARE ALREADY PREVAILING.

the fact that this government is better than any other government is not there .
all the ministers belong to sactions parties and so on , and most of them had been tried before including the prime minister , for me as long as these faces are there they cannot bring anything new , its another four years of poverty , and theift ,and the lebanese people will continue to pay the price .

ooooh yes, all of u ppl congradulate each other on having a government taken over by a terrorist group, its cronies, and Syria. Perfect result for Lebanon! Next stop: let's just make Lebanon another province of Syria, it officialy is now anyway! yay!

Excellent Cabinet Line up, the best since long time ago...

Wake up and smell the flowers. We don't have any economy left, in fact we do not have anything else to destroy. The few left in Lebanon are either too dumb to travel abroad or have family obligations. Lebanon is now nothing more than a leisure park and brothel for neighboring countries. Do you really think it can get any worse?

After reading some of the comments, all I can say is: Mabrouk lalsha3b el libneneh el kharoouf!

We follow these crappy "leaders" to hell and back! None of them really believe in Lebanon as a country for all Lebanese...they are all heads of Mafia and we follow them like sheep! MAAAAAAAA2