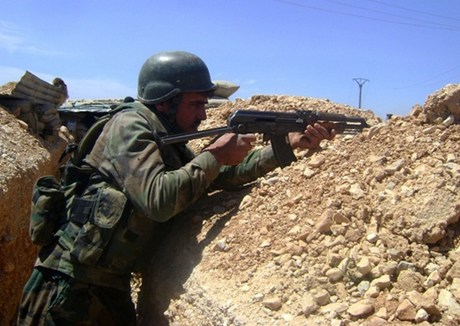 Syrian troops have captured much of the rebel stronghold of Qusayr, in central Homs province, squeezing opposition fighters into the north of the strategic town, a military officer told Agence France Presse on Friday.

The Syrian Observatory for Human Rights watchdog said regime forces backed by members of Hizbullah were bombing northern areas of the city, encircling rebel fighters there.

"The armed men are surrounded on all sides, there is no escape for them now," the officer told an AFP journalist accompanying army forces in the embattled town.

The regime uses the term "armed men" to refer to the rebel forces fighting to overthrow Syrian President Bashar Assad.

"The battle will continue until the complete liberation of Qusayr. We're in the second and penultimate phase of the fight," the officer said.

The Syrian army, backed by Hezbollah fighters, began on Sunday their assault on Qusayr.

They advanced into the south, east and west of the city, quickly claiming the municipality building in the center of town.

The eastern part of the town, which has been abandoned by residents, has effectively been transformed into a military barracks, the AFP journalist said.

Armored vehicles, military positions and fortifications can been seen in every street and on every corner.

Soldiers are posted on all the buildings overlooking the northern part of the town.

"There are many snipers who are trying to infiltrate buildings to monitor army movements in the secured areas," another army officer says.

At the entrance to a bakery, soldiers drink coffee and smoke cigarettes, while another group keeps a close eye on the main road, "to stop any infiltration by armed men," one of them said.

The army says it now controls the road linking Qusayr to the Lebanese Bekaa city of Baalbeck, a stronghold of Hizbullah which is allied to the Syrian regime.

Qusayr is strategically important for both the rebels and the regime.

For the rebels, the town of 25,000 people is a conduit on a route along which weapons and fighters arrive from Lebanon.

The regime wants to control the town to deny the rebels their strategic prize and also keep open the road between Damascus and the coast, which runs by Qusayr.

The Observatory reported violent clashes in the areas of Hamdiyeh and Arjuneh, as well as Dabaa airport, north of the city of Qusayr.

Hezbollah, meanwhile, "is using heavy artillery and mortars" in the fight against the rebels, he added.

The Observatory said at least 67 people had been killed across Syria on Friday, including 18 soldiers, 17 civilians and 32 rebel fighters.

I thought the Syrian "army" already finished the battle last Sunday, and liberated Aleppo a year ago, and Damascus two years ago. This is a war of attrition and hizbollah miscalculated and is paying the price with Lebanese young men. Hizbala can not do what bashar failed to do with scuds, migs, tnt bombs, chemical weapons. Hizbala calculated a quick victory before political negotiations, the worse possible scenario (the more realistic and currently unfolding) is a war of attrition, no politics, and more casualties in the Syrian quagmire. Not to mention the strong possibility of moving the war home.

yepeeeee ! FT knows what is going on in qousayr!!!! seems he is a baath agent in lebanon here only to speak in the name of his pimps... like a brave little FPM prostitute he is :)

Yes, I agree. I think killing each other is and must be a good thing since the people in this region have been doing so for hundreds of year. Allah yakoon maakon and please kill in the name of your Allah.

waw! so beautiful as always... if we listen to FPMers only sinioura and hariri stole lebanon.... they forget ALL about the present M8 ers who built fortunes under the syrian era... ther e was only hariri and sinioura? no ministers with budgets? no corruption on their part? LOL then WHY didn t aoun and his present government sue them? why didn t aoun who claim to have a list of names still isn t presenting it to justice? oh! he will have to accuse some of his friends and family?

seems they are really idiots or really brainwashed. in either case they need therapy rather than discussing with....

"money changes ideals too. LF, jumbi, independent lackey M14 christians flipflopped more than i care to remember, due to that money. "

but of course it did not change aoun who flipflopped when he arrived in lebanon... to ally with his worse enemies...

poor FT... drowning in his contradictions....

you show perfectly your lack of knowledge of the syrian society... but normal with stupid FPMers who would like to believe so...

lots syrians are with bashar because of the fear system he has installed in syria and his system of spying on your neighbor.... so yes, they are wise and prefer to pretend to be with him rather than disappear in his jails...
stupid FT as usual....

Lets be honest guys, Allah delivers these weapons to the extremists by hand. They have no need for trade routes.

"NNA Agency correspondent reported Friday that tenants of Halwas region on border with Syria confirmed olive orchards and wheat fields were in flames. "

oh! are hezbis going to respond to this other violation of the lebanese soil by a foreign army? LOL....................what about FPMers? olive trees were FSA? LOL! wheat fields maybe were salafis? LOL!

we keep telling you that it is the army job to respond to any foreign agression but you always say they are too weak so that is why hezbis are here!!! but now no?

thnx FT... once again you prove your stupidity....

coz syria is a foreign country that is attacking lebanese sovereignty but seems they have the right and lebanon is their home... you claim to want good ties? LOL! they attack you and you excuse them? waw! truly a coward sissy you are....

a real patriot defends his country against ALL attacks... not like sissy FPMers who have double standards on that....

no wonder coming from a stupid FPMer that thanked this regime....

oh! cannot find a better response ? i thought you were smarter! but this answer proves your lack of creativity... normal with only one neurone...

geagea maybe lacks this too! but i have no master... don t think because you dream of what is between aouns legs that all are like you... i prefer geagea s wife by far, i am not a fag like you poor thing...

lol! but M8 kept repeating assad had everything under control... that assad is strong... so you are admitting that he is not and thus need helps of hezbis!
but you also said that hezbis were not there to back assad but to defend only lebanese villages!

oh! poor FT... so many contradictions only prove how lost and desperate you are.... let us pity you.

oh! how pratcial... what a coward move once again when you know you are wrong....

Down with the FSA-Al Qaeda terrorists!

Seeing is believing. Too much talk. Let's see the result

FT - noone denies that there is arm smuggling back and forth and by many factions on all side. The hizb was also involved in training and advising regime militias and in patrolling border for regime. What is happening today is a totally different scale. The hizb is engaged in intense combat in syria in support of a criminal regime. What would happen to Lebanon if KSA decides to fund a mostly-Sunni army to oppose the Hizb? This is a game beyond all of us and the Hizb decided for all of us. This is not acceptable anymore.

FT - The Hizb is supporting a monstrous regime that killed tens of thousands of people. We know the brutality of this regime in Lebanon too well. From the get-go, their strategy was to fan sectarian hatred because that is the way for survival. The opposition proposed a rational moderate plan for transition toward democracy. All what I read here is mocking and support for the monster of Damascus from m8 supporters on this post. The extreme and criminal actions by this regime and lack of meaningful support is pushing more and more Syrian toward radical organization - because they have no choice. What you doing is propagandizing for an alliance of minorities. Israel must be happy and proud.

"Peace" - just shut up you poof.
No one cares about your stupid opinion

oh! i don t care about your opinion and it makes me happy to see you enraged little boy....

seems it is not allowed to speak against M8ers brave little fascist...

Flamethrower has obviously nothing else to do in life but sit and write comments on Naharnet. He - or she, since FT is a neutral, gender unspecific moniker - finds enough time to monitor and comment on every single news item that matters to him/her. Not only that, he/she manages to find enough time to answer all of those who bother to address him/her. Pretty amazing and boundless energy and so much time. Does he/she ever sleep? Go to work? Find time to eat? Clean the apartment? Shave (beard or armpits, depending on gender)?

For those who haven't figured it out yet, FT is a collection of professionals paid for by M8 to monitor and comment. They are doing their jobs for pay. The more you pay attention to them, the more importance you give them. Do everyone a service by ignoring their comments totally and absolutely. Let them rave and rant, spit vitriol and try to sell the world unconvincing propaganda.