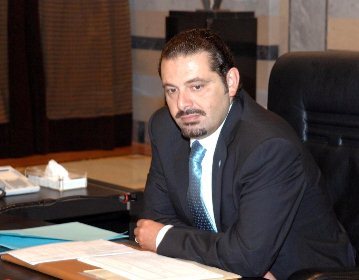 Al-Mustaqbal Party leader Saad Hariri stated on Saturday that Hizbullah leader Sayyed Hasan Nasrallah is demanding the recognition of the “State of Hizbullah," considering that the resistance has announced its “suicide" in the Syrian border town of al-Qusayr.

“You have announced yourself the end of the resistance on Liberation's Day,” Hariri addressed Nasrallah in a released statement in which he responded to Hizbullah leader's speech in the commemoration of the liberation of the South earlier on Saturday.

“You have announced the resistance's political and military suicide in al-Qusayr.”

Hariri accused Nasrallah of releasing a Fatwa that calls on the Lebanese to get involved in a war on Syrian territories.

“Your speech has no value to us, to most Lebanese and definitely to the Syrian people in all political, national, ethical, legal, religious and human measures.”

Nasrallah had said earlier on Saturday that the Lebanese rooting for the victory of President Bashar Assad's regime or the opposition's rebels should fight in Syria instead of clashing in the northern city of Tripoli.

“The age of referring to the Palestinian cause, the resistance and national unity for personal interests is over, and the Lebanese as well as Arabs and Islamic nations have come to recognize the truth. Time will reveal more lies,” Hariri told Nasrallah.

The Syrian Observatory for Human Rights announced on Thursday that 104 Hizbullah members had been killed in Syria since last autumn.

Nasrallah has said before that his party's involvement in Syria's war aimed at defending 13 Syrian villages along the border where Lebanese Shiites live, and the Sayyeda Zeinab shrine, revered by Shiites around the world.

But on Saturday, however, the Hizbullah chief pointed out that Syria is “the backbone of the resistance, assuring that he will not let this bone break.”

Hariri criticized Nasrallah for "undermining the Lebanese state, the army and the civil society's potentials to face anything."

“The state in Nasallah's eyes, is powerless and helpless in politics, security and economic matters and his solution is for Hizbullah to take the state's place and keep its arms for ever,” Hariri stressed.

“Nasrallah is telling all the members of the National Dialogue, on top of them President Michel Suleiman, that any talks about a defense strategy is worthless as there is only one party in Lebanon in charge of safeguarding the border and of using weapons whenever and wherever it desires.”

“He is asking the president and all Lebanese factions to recognize the state of Hizbullah,” Hariri announced. “Other parties must abide by this in order to avoid internal clashes.”

The former premier considered that Liberation's Day is the fruit of the Lebanese people's will “to liberate their land and defend it with all means.”

“This truth has been confiscated more than once since the year 2000, and Hizbullah and its followers wanted to consider this achievement an exclusive right for a party.”

Where was the coward speaking from today? The al-Mustardonal party should be required to have a leader that can,does and will actually someday in the future, reside in Lebanon. The State of Lebanon is powerless and will not be given weapons, like Hezbollah has, that are capable of defending Lebanon from another Israeli invasion. Iran and Allawites don't want to invade Lebanon. Israel has and will invade Lebanon. They did it before Hezbollah even existed and they will do it again. Harari is a collaborator and a puppet for the Saudis and USA. Good Luck, with "Leaders" like Harari you shouldn't need to blame anyone but yourselves for your sad and sorry state and country..

God bless this voice of reason. Hizballa is committing military and political suicide. An enemy of peace (hi peace!) just shot himself in the foot and in the cabeza.

And those who believe nasralah feritale empty rhetoric should have their head examined. the attack on qusair looks like Israel (Hezbollah) attacking Gaza (qusair), there too Israel calls is enemies, the true ones owners of the land," terrorists". It is also interesting how nasrala, a "religous " leader had to read from the paper upon quoting the Quran.

1/ palestinians elected hamas to take care of their fate and hamas supports the syrian revolution... why does hezbollah feels the need to decide for the palestinians? 1st hypocrisy...
2/ a shia extremist militia pretends to fight for the rights of christians, sunnis, druze, jews in palestine? LOL... 2nd hypocrisy...
3/ he went to fight in syria for lebanese but now openly says it is to support the regime in difficulty? 3rd hypocrisy...

and we could go on.... so those who support him are hypocrits or brainwashed stupid people.....

of course you wouldn't understand a statement that makes sense....

It's almost as if nasrallah has recieved orders to finish hezballah.. sending it to syria, causing 1 billion muslims to consider it an enemy, getting the EU to brand it a terror org, getting it's men killed.. this from a party that calculates it's every step as best it can.. how can it enter such a huge dangerous adventure. It really makes me wonder if iran and whoever else might be behind the hezb behind the curtains, has decided to finish hezballah to prep for something else..

hizbushaitan have sealed their fate and they know it as denoted by nasrallah yesterday.
when nasrallah talks about hizbushaitan being put on the terror list, it means it is really something that matters although he says it does not.
he alienated 1 billion Muslims and now he will pay the price.

Finally Nasrallah is showing his true colours. It's about time that the Government of Lebanon realised that and once and for all put him back in his rightful place, buried underground - permanently.

I disagree. We & Hariri should respond to everything Nasrallah says because he's full of lies.

But why does he call them "Resistance"? Before May 25, 2000, those guys were pretending to ask for only one thing: The implementation of Resolution 425 without negotiation with Israel (because all the deaths since the May 17 1983 negotiated by Antoine Fattal, the most decent of Lebanese, were not worth the salaries from Iran and corruption with Syria, of which Hariri and co were accomplices). And when oops, the Israelis left, they had to scramble to invent the Shebaa Farms ... Business being business.

But why does he call them "Resistance"? Before May 25, 2000, those guys were pretending to ask for only one thing: The implementation of Resolution 425 without negotiation with Israel (because all the deaths since the May 17 1983 negotiated by Antoine Fattal, the most decent of Lebanese, were not worth the salaries from Iran and corruption with Syria, of which Hariri and co were accomplices). And when oops, the Israelis left, they had to scramble to invent the Shebaa Farms ... Business being business.

Hariri is only saying what is actually happening on the ground. There is indeed a hizbullahstan in Lebanon: administration, police, soldiers, schools, hospitals, telecomunications, etc... Hizbullahstan controls the frontiers of lebanon be it the airport, harbor, and land crossing with syria. Hizbullahstan levy taxes on merchandises crossing through its control, taxes on businesses and receives direct subsidies and help from iran and syria.

In return for protection, money, and political backing, Aoun says nothing regarding this utter canibalization of the Lebanese state but instead covers it up by attacking sunnis and the west justifying hizbullah acts.