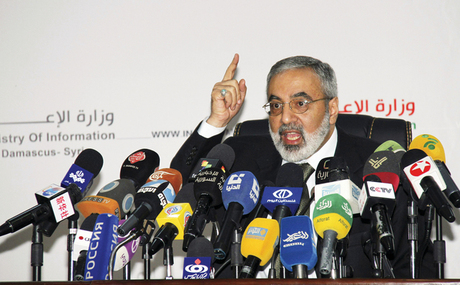 Information Minister Omran al-Zohbi accused Prime Minister Recep Tayyip Erdogan of Syria's former ally Turkey on Saturday of "terrorizing" his own people and called on him to resign.

"The demands of the Turkish people do not justify this violence, and if Erdogan is incapable of using non-violent methods, then he should quit," state television cited Zohbi as saying after rioting in Istanbul.

"Erdogan is leading his country in a terrorist way, destroying the civilization and achievements of the Turkish people."

Zohbi's remarks came as Erdogan vowed to press ahead with a controversial plan to redevelop an Istanbul park, calling for an immediate end to violent protests against the project that have spiraled into anti-government demonstrations.

On Saturday police used tear gas against protesters in Taksim Square, the epicenter of the protests that have left dozens of people injured and have earned Turkey a rare rebuke from its ally the United States.

Erdogan admitted there had been cases of "extreme" police action against demonstrators.

"The fact that he suppresses peaceful demonstrations proves that Erdogan is disconnected from reality," Zohbi said, adding: "The Turkish people do not deserve such savagery."

"We wish the Turkish people only stability and calm, and urge that Erdogan act wisely and not treat the Turks the way he has treated the Syrians," he added.

Ankara, formerly a key ally of Damascus, supports the rebels battling to oust President Bashar Assad's regime. Some 400,000 Syrians who have fled the violence at home are now refugees in Turkey.

he has a point to some extent... but firstly an "information minister" is a ministry that middle eastern countries should stop using or just change to the nazi era "propaganda minister".

finally... why open your mouth? everyone is seeing the hypocrisy and true vision of this turkish government. They are banning alcohol consumption after 10pm and "public displays of affection". the secular military and public will not allow this sectarian, religious ottomans to reverse Turkey's journey of being a secular, open, progressive, inclusive democracy. now lets wait their "humane" response to the kurdish rebels!

This is absolutely hilarious. While indeed the protesters need to be respected. The police fired tear gas. Not bullets at them. Erdogan if loved or hated was elected in fair and free open elections. By an overwhelming majority. And to compare him to Assad who never had to WIN the people's right to govern borders on the comical and insane. One is so far from the other. Look in your own backyard before you criticize other you impotent waste of oxygen.

Your comment, "given the heavy handed syrian government response to the original legitimate peaceful protests that occurred years ago...

Similar comments permeate the web. Strangely, NONE of the anti-Assad commentators ever presents a video link demonstrating this allegation. I'm not from Missouri but I still say: "Show me."

It is quite difficult to fairly analyse your anti-Assad screed as your lack of ability with the English language ﻿is unbefitting a proper portrayal or meaning. You end your comments rudely as I suppose is your character. Too bad.