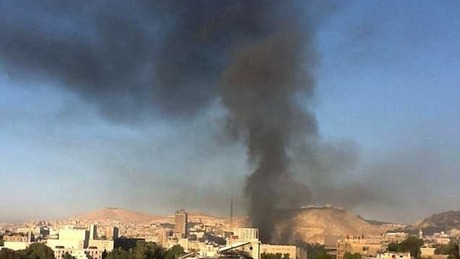 "One mortar round hit at the airport's edges, near the runway, causing two flights coming from Latakia (in northwestern Syria) and Kuwait to delay their landing. The take-off of a flight to Baghdad was also delayed," said the minister.

No passengers were hurt, but a second round hit an airport warehouse and one worker was wounded, Said added.

The rounds were fired by "terrorists," the regime's term for rebels, he added.

The statement comes after the Syrian Observatory for Human Rights reported a homemade rocket attack at the airport, the regime's main gateway to the world.

The airport lies southeast of Damascus, near several flashpoint areas and near the heated Eastern Ghouta region, large swathes of which are in rebel hands.

For several months, rebels have been trying to cut off the regime's access to the airport.

And until two years ago I used to fly Syrian air because MEA was f***ing with me. I'd book my ticket here in Europe and when I'd go to the agency they'd tell me my seat has been given to someone else and would charge me a further 100€..... tssss

ahmedtheelectricalengineer, you seem to be the most sectarian and hateful little blob on this site, which is impressive and equally disgusting.