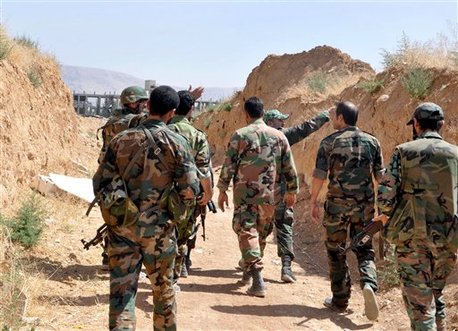 More than 70 Syrian military officers have defected to the opposition and crossed into Turkey, an official there said on Saturday, as world leaders prepared to discuss the Syrian conflict at the G8 summit.

The defections followed a U.S. decision to give the rebels "military support" after Washington reviewed evidence showing the Syrian regime had used chemical weapons.

But Russia said the regime, which bombarded the outskirts of Damascus on Saturday, had no need to use chemical weapons because its forces were making steady advances on the ground.

The defection of 71 army officers and two policemen came over a period of 36 hours, the Turkish official told Agence France Presse.

The group included six generals and 22 colonels, the official added, and was the highest-level defection in months.

"The five leaders discussed Syria, including the regime's use of chemical weapons against its own people, and ways to support a political transition to end the conflict," the White House said on Saturday.

The Syrian conflict is expected to dominate the two days of meetings, with the U.S. pledge to arm the opposition likely to be a topic of discussion.

On Thursday, Washington said it had evidence that the Syrian regime had used chemical weapons, including the nerve gas sarin, in attacks that killed up to 150 people.

It also said without giving details that the administration had decided to boost its support for the rebels seeking to overthrow President Bashar Assad, including "military support."

That decision, and the allegations of chemical weapons use by the regime, were criticized by Russia, which is a staunch Assad ally.

Moscow has said it is unconvinced by claims of chemical weapons use in Syria and Foreign Minister Sergei Lavrov said on Saturday that the regime had no need to use such arms.

"The regime, as the opposition is saying out in the open, is enjoying military success on the ground," he told reporters during a joint press appearance with his Italian counterpart Emma Bonino.

"What sense is there for the regime to use chemical arms -- especially in such small amounts?" Lavrov asked.

He warned that it would be wrong for the U.S. administration "to be sending signals" to the opposition that could jeopardize attempts to find a political solution to the Syrian conflict.

Despite supporting opposite sides in the fighting, Moscow and Washington have both backed holding a peace conference in Geneva in coming weeks.

The Syrian government is reportedly willing to attend any such meeting, but the opposition has set conditions for its attendance, including the withdrawal of regime-allied Lebanese Hezbollah from Syria.

The group, which relies on a network of activists, lawyers and doctors, reported air strikes on the eastern neighborhoods of Jubar and Barzeh.

Syrian state news agency SANA said the army had "restored security and stability" to the village of Ahmadiyeh and parts of Khamissiyeh, in the Eastern Ghouta region of Damascus province.

Eastern Ghouta has been the regular scene of clashes between rebels and government troops in recent months.

Called cleansing of the Syrian Army of traitors and filth. This is great news.

While it is premature to celebrate the US administrations decision to provide 'military support" to the Syrian revolutionaries, it definitely is a major qualitative move by President Obama. He is a timid president and not exactly an inspiring leader but he also is a deliberate and shrewd calculator who has shown that he is not loath to grab the opportunity if and when it presented itself like when he ordered the Bin Laden raid.

To be sure, all indications up to now pointed to Obama wanting to forget the Syrian mess and sweep it under the carpet. However, he finally concluded that it is not going to go away. More importantly, that he has heretofore underestimated the importance to the US of engaging and handling the Syrian revolution. That he appointed Susan Rice as his National Security Adviser attests to the change outlined above. Does that mean that he is now ready to start sending SA missiles to the revolutionaries? Of course not, at least not yet. What it does mean is that he finally realized that Russia and Iran are playing hardball and are playing for keeps and that if he does not ante up the US has no chance of winning anything.

Having made the move to arm the revolutionaries, Obama is now looking to gauge Russia's reaction. So far it appears the Russians did not expect Obama to take the step he did and they feel somewhat apprehensive judging by the latest remarks made by Putin and Lavrov. Obama's task is to make sure and convince the Russians that he will not back down unless he gets major concessions. That is why it is premature to celebrate as yet. One silver lining in all of this is that while Obama is indeed too timid for a leader, previous experience indicates that when he does finally move he does so with the conviction that he will go all the way. Whether he actually does stay the course in this instance remains to be seen but no one should underestimate the seriousness of the move Obama has made.

Seventy-one officers, including six generals, have defected from the Syrian army to Turkey, a Turkish official said yesterday, the biggest single mass desertion of senior soldiers from President Bashar Al Assad’s security forces in months. It was not immediately clear why the group had deserted.