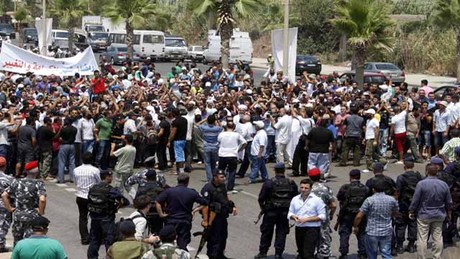 The protestors assaulted TV crews in Abra, smashing the windows of their cars and breaking their cameras during the march.

The attack prompted the Lebanese army to ask journalists to leave Sidon and the northern city of Tripoli until the end of the protest in the southern city which allegedly erupted after the mosque's new Imam, Sheikh Mohammed Abu Zeid, did not mention al-Asir when he delivered his sermon to worshippers.

Tripoli has a large presence of Islamists. The city's Ulemas have accused the army of collaborating with Hizbullah to target the Sunni community in line with an Iranian scheme.

Al-Asir, a 45-year-old cleric who is no where to be found since last month's deadly gunbattles between his gunmen and the Lebanese army, resurfaced Thursday in an alleged audio message in which he described the clashes as a plot against him.

The cleric called on the Sunni community to “break the barrier of fear and fear only God,” urging them to protest “in a peaceful and civilized manner” after Friday prayers “in coordination with the Muslim clerics.”

State Commissioner to the Military Court Judge Saqr Saqr charged on Thursday 27 people for their involvement in the Abra battles where Bilal Bin Rabah mosque is located.

Ten of them were charged in absentia, including al-Asir and a onetime prominent singer-turned Salafist Fadel Shaker.

The cleric teamed up with Shaker when around two years ago he began agitating for Hizbullah to disarm.

If convinced, the suspects face the death penalty.

The press gave unnecessary attention and coverage to Asir since the beginning, and that was wrong and contributed to his somehow rise, becoming a daily topic in the news. It seems that they don't learn, instead of ignoring them, now that he has disappeared, the're still after them possibly hoping for a new Asir to come up again. The article "La Presse Qui Tue" says it all.

it failed, because real sunnis dont back such a scumbag, but the PR still lingers................
That is right, real Sunnis are moderates. I wish the Shi3a exhibited the same, then HA would have failed as well and the Lebanese State would have been in control, our economy would have been better off, our young would be pursuing careers in Lebanon, and the army would be in control (I am assuming the Palestinians will be disarmed as well)

lol, trying to hide your shame of these savages you support by attempting this weak diversion?

that pic can't be you... but the avatar i have is totally me.

put em in a cage in roumieh , specialy those who assaulted the tv crew. filthy ppl

This is the true face of the February 14 Saudi-Wahabi coalition. The mask has fallen and the rest of Lebanon is now seeing the truth.

Asir and HA are the true face of extremism ..... We disavow the first but you are a blind follower of the latter.

What do these extremist think they are doing?? Who are they protesting for? A puppet of KSA that has done nothing but create strife ever since his talents were discovered. No Lebanese man, woman or child should put up with or tolerate these thugs ruining Lebanon. Lebanon has always been known for its friendly hospitality and friendly faces, ever since the KSA supported salafists have been on the scene they have effected and even tarnished the image of Lebanon.

You must see an eye Doctor, because your vision is limited to seeing only one half of what is wrong with Lebanon (the small half... Asir and Salafists). But you fail to see the big half of the problem (HA, Iran and Syria). But you guys are liked a programmed Robot. You are brain washed and incapable of critical thinking.

this asir issue is going stronger as it seems.
I said it since day one: we will have 100 new asir.
thank you hizbushaitan for increasing sectarian strife.

Haha. Show that damn tape too. Answers a lot of questions. Both would.

UF.T., until you and others in M8 acknowledge that HA is more dangerous to Lebanon than Asir (given their size and armament, and strategic thinking of how to lead us to WEelayat Elfaqih), then you will lack credibility.
Can you repeat after me: Asir, Salafists, Palestinians, and HA are should be disarmed.
But I can almost predict your answer, so I am not holding my breath

they attack TV crews like hezbi friends burned down future tv... two fanatical parties, both against press... no wonder coming from extremist muslims....

They are brothers from different mothers.

So it is true that HA and the Americans and the Zionists are all working together.
Yes the Lebanese are after both Asir and HA, but HA is too big of a fish at the present time, their day will come.

I hope that day comes soon when every Lebanese no matter what religion, ethnic background, social economical class can live together in peace. But the first thing that needs to be done even before disarming H.A. is to disarm the Palestinian camps in Lebanon as this is most likely the kind of weakness foreign interests look for to exploit Lebanon, and the precursor to any other Lebanese group to arm outside the auspices of the State.

They are fed up from hizbi control of state institutions and arrogance of so-called resistance, dont even speak about syrian war impact...

What is this "Assir Supporters"? Since when? how many? who knows them?

The video you are referring to has been band for violating youtube policy. Your language is indecent and should be band for violating human decency (and hopefully Naharnet) policy. Common brother, please keep this forum clean and family friendly -please.