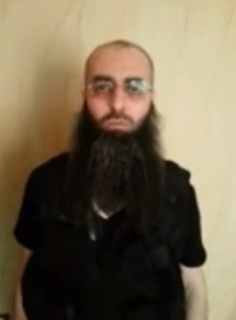 Islamist cleric Sheikh Ahmed al-Asir, on the run since the Abra battle, has likely appeared in an audio and not a video recording due to the fact that he had to change his physical appearance in order to be able to flee the military crackdown, reports said on Friday.

LBCI television said Asir's wife Amal and some of the clerics relatives and close aides in Sidon have confirmed the authenticity of the audio message.

In a recording uploaded Thursday to YouTube, SoundCloud and gulfup.com, a defiant Asir described the deadly Sidon clashes as a plot aimed at ending his presence in the area, accusing Hizbullah of leading and supervising the fighting in the southern city and its suburbs.

“These people are trying to give the impression that this recording is their first evidence that Asir is still alive, although security officials have doubted that, saying the family had received other proofs,” LBCI said.

It quoted sources close to Asir as saying that “he did not appear in a video because the requirements of hiding maybe forced him to change his appearance, such as having to shave his beard, and therefore he won't appear audio-visually before he regains his previous looks."

Quoting "some clerics who are close to Asir and who tried to mediate during the clashes," LBCI said the fugitive cleric had managed to leave Lebanon and enter Syria.

Meanwhile, "security authorities continued to analyze the content and technical aspect of Asir's recording to verify if the voice is that of the cleric, although the military judiciary is confident that Asir is still alive and that's why he was mentioned in the lawsuit," LBCI added.

"Security agencies are also trying to determine how the recording was uploaded to some websites in a bid to identify its source or the individuals who published it, but no progress has been made in this regard," the TV network said.

Eighteen soldiers were killed and 20 others were wounded in fierce clashes with gunmen loyal to Asir on June 23 and 24. Twenty members of Asir's armed group were also killed.

I heard he shaved and calling himself now Fayrouz... You've got to hear his voice too!!

Meanwhile, " shia hezbalalh authorities continued to analyze the content and technical aspect of Asir's recording to verify if the voice is that of the cleric, although the shia hezbalalh judiciary is confident that Asir is still alive and that's why he was mentioned in the lawsuit," LBCI added.

He is now in Syria and singing "Bahebak Ya Lebnan..."

Maybe Asir is hiding out in Nasrallah's underground labyrinth. With a little beard trimming, a black turban and a few lessons in farsi he will blend right in.

Truly, there are no differences between the two radical elements. I urge all these radicals to leave Lebanon and go to their respective adopted home bases like homing pigeons do.

These type of madmen are all the same, fanatical and delusional. It is strange how the Hizbullah cheerleaders rant against one but idolize the other.

akh akh. Why are we going through this crap in Lebanon. Why can´t we live in the 2013. Why can´t we send all the over religious people to some desert where they can kill each other? Why cant moderate people from all religions unite and get rid of this longbeards and extremist from all sides? Why can´t we decide all together that we can only fight evil with the pen and not with the kalashnikov. We have been loosing for 60 years now...

Yes Tyrian, i don't know if you're familiar with pareto's 80/20 law.... But based on this you have your answers. We, Phoenicians never were good warriors... But skilled traders.... Those who raise arms in Lebanon are descending from Xerxes and Darius and some other tribes.... Far away from the levant. Personally, I gave up on Lebanon and I'm working on selling 90% of my inheritance.... I'll just hold on to my flat in Beirut for now. I'm also planning on leaving Europe.... But that's another day's story. Good night

ben,
When the good ones leave (dager and you and many more)evil gets stronger. Do not give up, do not sell (unless you need the money). Make sure your children have place in their heart for the land of cedars. I lived most of my adult life abroad, but I am holding on to the land of my ancestors and will be building there and I want to be buried there as well.

iranpatriot,
I wish you would go to your home country where the brave ones were trained. You are cute, but sorry to say you do not have much between the ears.

HA slashes the living with knives until they die, Asir then eats their hearts ..........
Two things are infinite: 1) The universe, and 2) your stupidity ... but I am not so sure about the universe.

Exactly.......... I said the same in a previous post.
If the Shi3a were as enlightened, then HA would not have remained past 2005 (it outlived its usefulness and its welcome).

most of sunnis are not for assir, most of shia not against HizbIran, God protects us from fitna and civil war.

Why so you disagree with the death by slashing theory. I saw two youtube videos on on the Cannibal (only one Cannibal) and one on a group of HA warriors placing 3 prisoners facing a wall and HA warriors with big knives started slashing their backs for more than 5 minnutes and finally stabbed them repeatedly in the skulls until they dropped dead. You chose to believe only the Cannibal side and not the your Warrior deeds.
To tell you the truth, the Cannibal is the lesser of the two sick deeds because once a person dies they do not feel pain, but how one kills someone says a lot about their humanity (killing by itself is an aweful deed, ........ ). God insyill some mercy and humanity into everyone's soul.

the1phoenix .......... I am sorry but I see contradiction in your posts. You can not claim what you posted now while at the same time accuse Hariri of helping/harboring Asir and his likes. Mutaqbal is the Sunni majority (even-though it is an eroding majority thanks to HA). Maybe you can explain.