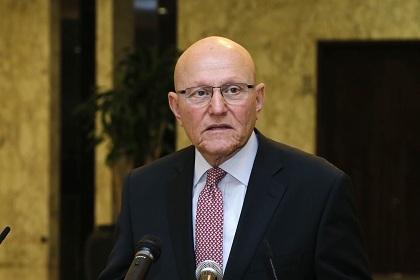 “His stances had always had the biggest effect in … producing a new political equation,” he said.

On Wednesday, Jumblat told Egypt’s Middle East News Agency MENA that he “will study the available options, including a neutral de facto cabinet, should a neutral technocratic one be rejected.”

“I do not want to take the risk in advocating a de facto government as I was among the first to demand the establishment of a national unity cabinet that Prime Minister-designate Tammam Salam had described as one of national reconciliation,” he said.

In his remarks to As Safir, Salam hoped that Eid al-Fitr would be an occasion for all political parties to “review their behavior” and facilitate the formation of the new cabinet to resolve pending issues.

The PM-designate refused to announce a date for the line-up, saying “I make my choices based on my convictions … which stem from the national interest and what is beneficial for the country.”

“In this case, the timing becomes a secondary issue,” he said. “It's not important if the government is born before or after the Eid.”

Salam reiterated that he is seeking to come up with a cabinet that is “compatible with the requirements of the nation's interest.”

His attempts to form a government of rival political figures have faced major obstacles over conditions and counter-conditions set by the bickering March 8 and March 14 alliances.

As much as I commend the guy's efforts in trying to form a government, time IS an issue. The sooner the better I'm sure the people agree. We're in dire need of able politicians. Muster your energy, influence, and nationalistic rhetoric, and make with it.

It is not "according to salam". It is simple algebra. Jumblat's votes in parliament have been needed by both March 8 and March 14 to sway things one way or the other. Without Jumblat's votes, neither has a majority in parliament to pass a vote of confidence on a PM (or electoral law, etc). Whether he resigns or not, this fact will not change given the current equation. Direct your frustrations at someone else.

Salam: Jumblat Has Biggest Effect in Bringing a New Political Equation.................
He learned that art from his father and forefathers. He is a master manipulator who knows how to leverage others such that the wind is always in his back.
Pray for Lebanon.

Salam: Jumblat Has Biggest Effect in Bringing a New Political Equation.................
He learned that art from his father and forefathers. He is a master manipulator who knows how to leverage others such that the wind is always in his back.
Pray for Lebanon.

if that is not the biggest problem in Lebanon. A small secular warlord has more power than the people....Can We all say its for change...