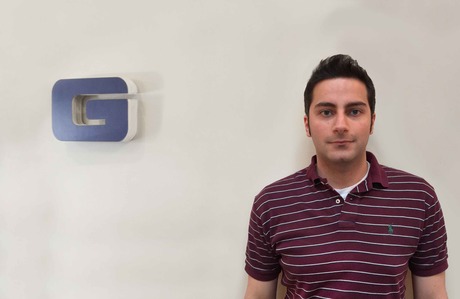 Roy Naufal started building websites when he was just 11 years old and sold his first site to a shipping company at age 13. He was one of the first web developers in Lebanon. When he turned 15, DiscoverLebanon.com hired him as part-time programmer — an opportunity that led to an interview on the Voice of Lebanon radio station. There he amazed the host so much that she invited him to cohost the show, which focused on IT support and aired three times per week. At around the same time, Roy was invited to present the computer segment of Future TV’s Noah’s Arc, a television program targeting youth.

For an entire year, Roy cohosted the radio show and hosted segments of Noah’s Arc. In parallel, he continued to work on freelance projects during high school and college, even after Ayna Corporation, a search and mapping engine focused on the Arab world, hired him during his senior year of college.

Roy’s career outlook began to change in 2009, when he participated in Beirut’s first Startup Weekend; his team won first place for online projects, and third place overall for an online social platform focused on finding deals via a referral system.

The next year, at age 25, Roy resolved to pursue his own dreams instead of work to realize someone else’s goals. Roy, who also played bass in a band, joined one of the other band members and childhood friend, a graphic designer, to found their own business. In 2011, they registered Grind Design and Development. At the end of 2011, a third band member, also a graphic designer, became the third partner. Grind’s current team consists of the original three partners, supported by six developers and two designers, and this year they plan to hire an additional two developers.

Grind provides all types of digital and print design as well as development services focused primarily on websites, mobile applications, online competitions, and custom software solutions. Its client base already includes other digital agencies that outsource their development services to Grind, as well as the Ministry of Telecommunications and private sector clients such as ArabNet, Assurex, the Greek Orthodox Patriarchate, Lebanese comedian Nemr Abu Nassar, Magnolia Bakery, Maxime Chaaya, Metlife-Alico, Nestlé, Sanita, and the Swiss Business Council. Roy and his team have won numerous awards, including all ArabNet Development Tournaments in 2013 – 2015.

Despite his early start in business and varied experience, Roy discovered that he could learn valuable business lessons at the AMIDEAST Entrepreneur Institute. Upon winning the Byblos Startup Weekend in 2013, he received a free enrollment in AEI’s “Start Your Own Business” workshop. Although his business was already performing well, he enrolled to see if it might help him streamline his business processes further.

Roy notes, “The workshop opened my eyes to certain aspects of the business that I was not fully seeing. Because of what I learned, I streamlined certain internal processes and started better analyzing our profits and losses, which led to more efficient processes and increased net profits. My workshop participation also resulted in the creation of a business plan that includes clear mission and vision statements and a well-developed financial section.”

Today, Grind has an office in Dubai and is planning further expansion there. Once the Dubai operation is well established, the Grind team hopes to expand their business to other countries in MENA. The long-term business goal is to become the leading partner for all small- and medium-sized digital agencies in the region.

@Roy
I quite enjoyed reading this article. I wish you the best and courage for you to succeed and be an inspiration to the young Lebanese. Please stay in Lebanon and encourage the other young Lebanese to stay and be a hope for the future
Best of Luck