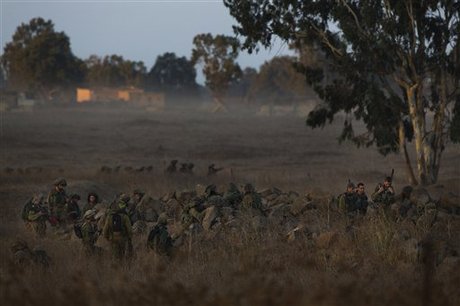 And she said a comrade suffered shock from the explosion near them of two mortar shells, "apparently stray fire," from fighting in Syria.

She added, without elaborating, that Israel forces returned fire.

The Golan, seized by Israel from its Arab neighbor in the 1967 Six-Day War, has been mostly quiet since the 1973 Yom Kippur War.

Tension, however, has risen since the 2011 start of the conflict in Syria between rebels and regime forces.

Israel's armed forces chief on Tuesday predicted that the strategic plateau could at any moment erupt into serious violence.

"The pastoral landscape of the Golan Heights... could turn with a sudden bang into a battleground of blood, fire and pillars of smoke," he told an academic conference on potential future threats.

Israel insists it is not taking sides in the Syrian fighting.