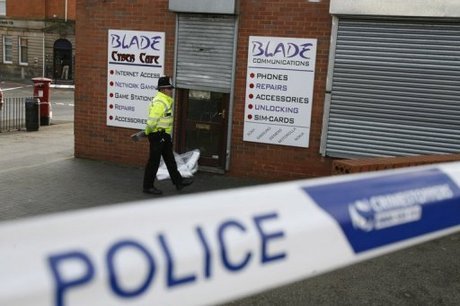 A Ukrainian student with a hatred of "non-whites" on Monday admitted murdering a Muslim grandfather and planting bombs near three British mosques.

Pavlo Lapshyn, 25, pleaded guilty in court to stabbing 82-year-old Mohammed Saleem to death as he walked home from a mosque in the central English city of Birmingham in April.

Lapshyn, a postgraduate student from the eastern Ukrainian city of Dnipropetrovsk, also admitted plotting to cause explosions at mosques in three towns in central England between April and July.

No one was injured in the blasts in the towns of Walsall, Wolverhampton and Tipton.

Lapshyn, who said he was motivated by racial hatred, is due to be sentenced on Friday.

Police said they found more bomb-making equipment in the room he was staying in as he carried out a work placement at a software firm in Birmingham.

"We found part-made devices in Lapshyn's room plus chemicals and bomb-making equipment, so it is clear he planned to place further devices with the intention of killing or maiming innocent members of the public," said Detective Superintendent Shaun Edwards of the West Midlands Counter Terrorism Unit.

"All three of the devices he detonated were powerful but his final attack in Tipton was the first to feature shrapnel and nails.

"He placed this near the mosque's car park with the intention of hitting worshipers as they arrived for prayers.

"Thankfully the service had been put back an hour so the mosque was largely deserted when the bomb went off."

He added that Lapshyn had told police he had acted alone rather than as part of a wider cell, and "was keen to take credit for masterminding and carrying out the attacks".

The student came across as "calm, calculated and committed" during police interviews, Edwards said. British police are now in Ukraine to try to understand more about his background.

"It is of great relief that he is not free to walk the streets any further," he told reporters outside London's Old Bailey court.

Lapshyn had only been in Britain for a few days when he murdered father-of-seven Saleem, a well-respected member of the local Muslim community.

He was arrested on July 18 for one of the bombings, and then further arrested two days later for the murder.