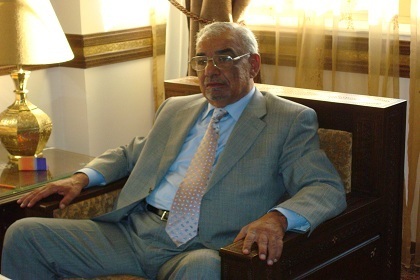 After the news of the warrant broke out, several supporters of Eid took to the streets of Tripoli to protest Saqr's decision.

Talaat al-Shamal road, which leads to Tripoli's neighborhood of Jabal Mohsen, was briefly blocked by protesters.

Meanwhile, Future television reported that the army closed a road leading to the neighborhood to avoid an escalation of events following the issuing of the legal notice.

Ha announced that a peaceful march will take pace on Tuesday from Jabal Mohsen towards Abdul Hamid Karami square in the city.

"My family and I will lead the march regardless of what might happen," he said.

Later, al-Jadeed television reported that Syrian tanks deployed behind the berm in the Hikr al-Dahiri area near Ali Eid's residence in the northern city of Akkar.

The Internal Security Forces Intelligence Bureau summoned Eid on Wednesday to question his alleged involvement in the August double bombing in the northern city of Tripoli.

But on Thursday, the northern leader said he was willing to appear before any security agency except for the Intelligence Bureau.

“I don't trust it at all and its history is not honorable, especially with Syria's allies,” he explained.

Eid's driver Ahmed Mohammed Ali is being held by the Intelligence Bureau on charges of smuggling to Syria Ahmed Merhi, one of the main suspects in the bombings against al-Taqwa and al-Salam mosques in Tripoli on August 23.

MTV reported that Ali was first arrested on October 26 by Lebanese army intelligence agents on charges of smuggling Merhi into Syria at the request of the pro-Damascus former lawmaker.

Merhi is reportedly the driver of the second explosive-laden vehicle that blew up near al-Taqwa mosque.

On October 14, seven people involved in the August bombings were charged, including three in custody. The majority are from the Tripoli neighborhood of Jabal Mohsen.

Forty-five people were killed and over 800 wounded in the twin bombings.

The Arab Democratic Party has denied any involvement in the attacks and stressed that the suspects are not members of the party while slamming media leaks attributed to the Intelligence Bureau.

finally the judiciary is moving.
now let us see if this horrible terrorist attack that took the lives of at least 500 Lebanese citizens will remain unpunished or it will become like the samaha case.
ali eid's party should be disbanded and all the weapons collected.
this mass murderer should hang.

and by the way:
I hope to see those m8 guys who call themselves Lebanese denying this against their own people.
this Syrian regime has brought only destruction to Lebanon.

President is goin to KSA, he wants to show them that sunnis still are lebanese citizens. But everybody knows who controls lebanon...

not long before people call him a zionist cannibal terrorist! LOL

zionist terrorist he is,like his cousin bashar.
Don't know about cannibal though...

i was talking about saqr saqr....

Ok good. Now arrest the Tripoli Future MPs like Kabbara and Merhebi who are funding and arming FSA-Al Qaeda and other terrorist networks within Tripoli and Lebanon.

So he will lead a peaceful march on Tuesday, now that is what we been waiting for, peace at last. Mr. Eid , can you just let us know which streets will you be taken.

No comments on the Syrian tanks deployed near his house, can somebody please clarify. Is this for real?