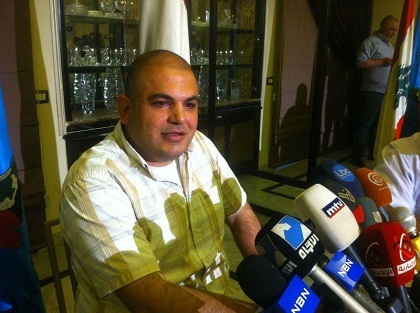 According to media reports, the request comes in light of the complaint filed by the Internal Security Forces General-Directorate with the public prosecution, demanding the adoption of the necessary procedure against Eid over his recent statements.

On Saturday, Eid slammed the ISF Intelligence Bureau as a “spy agency working against Lebanon's interests,” stressing also that the party's head Ali Eid will not go to the ISF's office for questioning.

“We will act only in accordance to the law,” he said, making a veiled threat that killing ISF members was permissible.

He has been charged along with his driver Ahmed Ali with helping Ahmed Merhi, who is the suspected driver of the explosive-laden vehicle that blew up near al-Taqwa mosque in the northern city of Tripoli, to escape justice.

“Supporting the killing of others is a criminal takfiri act that is punishable by law,” Charbel warned.

“We strongly condemn this kind of language that expresses a violent and irresponsible attitude,” he added.

Sagh - Assir gang was crushed. His thugs killed or arrested and he is on the run. The same fate should befall Rifaat Eid, his gangster father and their mafia.

The guy in the photo, the chief prosecutor, looks like a thug? Well, he sure talks like one: “'We will act only in accordance to the law,' he said, making a veiled threat that killing ISF members was permissible."

This verbal statement is nothing in comparison to the lives he and his relatives took. Seriously Mr Judge, stop being blind and apply the laws of the Republic for all counts.

Sagh - another childish post! The Eids first imposed themselves upon the alawite community through force with the help of syrian regime. They committed massacres, killings and continued to commit extortion. They dominated the crime scene in Tripoli till recently. t

@distructive
you are openly a sectarian m8 who knows only what his masters tell him.
over 500 killed and injured by this guy who is openly threatening ISF members, and you try to sway the attention towards what an angry mob did or said?
the problem is this guy, his party and those behind him: they are all terrorists and they should pay for what they did.
anything else is just plain treason.

Distructive, we want everyone in Tripoli to be disarmed, from both parties. Those idiots fight and we have to spend the nights in fear. With that said, there is proof that Eid had some role in the terrorist bombings, this is why he was asked to present himself to the authorities. No one is targeting Alawites and Shia, we simply want the perpetrators of the bombings to be sent to justice regardless of his religion. This approach in linking the criminal coming in for questioning as targeting his sect is silly. Else no one will ever face justice!

Hat bunch of nonsense distructive. The alawites are not accused of the bombing. Not even the mafia by the misnomer the Arab Democratic party is. Not even the criminal Ali Eid (murder, torture, extortion, robbery, smuggling, drugs, ) has been accused. He is wanted for questioning because his driver confessed to military intelligence (which in the sad state of lebanon is accused of being pro hizb) of smuggling one of the bombers (2 bombs which killed dozens and wounded hunders) to Syria under orders from Ali Eid.