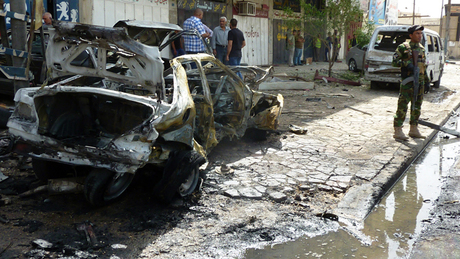 Suicide bombings and other attacks killed 30 people in Iraq Wednesday, and authorities found the bodies of 19 others shot dead in Baghdad, scenes eerily reminiscent of the country's gruesome sectarian war.

The latest violence, just months ahead of landmark elections, pushed the number of slain so far this year above 6,000 as the country endures its worst prolonged spate of bloodshed since 2008.

Although there have been no claims of responsibility for much of the unrest, authorities are concerned about a resurgent al-Qaida, emboldened by the civil war raging in neighboring Syria.

Most of the violence struck Baghdad and Sunni Arab areas of northern and western Iraq, which have borne the brunt of the months-long spike in bloodletting.

Four suicide bombers detonated their explosives, but the carnage could have been much worse because security forces shot dead several would-be suicide attackers.

Meanwhile, in two separate areas of the capital, police found the bodies of 14 men, all in their 20s or 30s, and all shot dead, medical officials said.

Eight of the corpses were found blindfolded in the mostly Sunni Dura neighborhood, while six others had been dumped in a canal in mostly Shiite Shuala.

In the northern district of Hurriyah, a family of five -- three men and two women -- were shot dead in their home in a pre-dawn attack.

At the peak of sectarian fighting, Sunni and Shiite militiamen would regularly carry out tit-for-tat kidnappings and assassinations and leave scores of corpses littering the streets, many of them bound, blindfolded and showing signs of torture.

Shootings, bombings and mortar fire in various other parts of the capital left five others dead Wednesday.

In Abu Ghraib, west of Baghdad, a man blew himself up in the middle of a funeral, killing nine people.

In northern Diyala province, a vehicle rigged with explosives and detonated by a suicide attacker killed three members of Kurdish peshmerga forces.

One of the attacks involved a car bomb set off by a suicide attacker on the western outskirts of the city, followed by a firefight between militants and police in which four suicide bombers blew themselves up.

Five policemen were killed and 11 were wounded.

Ramadi is the capital of the western desert province of Anbar, which shares a long border with Syria. Sunni militants linked to al-Qaida have exploited the relative lack of security to set up training camps and carry out attacks on both sides of the frontier.

Shootings in and around Mosul left five people dead, and a Sunni anti-Qaida militiaman was gunned down in Salaheddin province.

The government has trumpeted wide-ranging security operations targeting militants, primarily in Sunni-majority areas in the north and west, including the arrest of 25 people on Wednesday, but daily attacks have shown no sign of abating.

More than 6,000 people have been killed so far this year, according to an Agence France Presse tally based on reports from security and medical officials.

Diplomats, analysts and rights groups say the government is not doing enough to address the root causes of the unrest, particularly disquiet among Sunnis over alleged mistreatment at the hands of the Shiite-led authorities.

Prime Minister Nuri al-Maliki used a recent trip to Washington to push for greater intelligence sharing and the timely delivery of new weapons systems in a bid to combat militants, while France and Turkey have offered assistance.

That's the price of the American "Democracy"!

Correct. The type of Jeffersonian Democracy was born uniquely in the U.S., and it is malleable enough that shaped, formed and survived throughout the migration of vast variety of cultures who came to the U.S. Having said that, what the U.S. did may have opened a window of opportunity for the Iraqi sects to form their own and live peacefully.

Same al qaeda that suicide themselves in Syria and Lebanon

@anonymetexasusa What do you call the people that fights against terrorism? Your beloved USA did the same after 9/11 whats wrong with Bashar doing the same in his country? The only 1 point view i see is yours. I don't like westernes views aswell as AL qaedas because i know in the end, they are just 2 different sides of the same coin.

And no its untrue that Shias fight back at all, they didn't even fight back after years of torment and suicide bombings by the Sunni population, i hope that they will actually wake up now and fight back.

As far as i remember texas, Al Qaeda was in Iraq long before maliki got elected. So your theories doesn't add up.

Yes i deny that it ever happend, because Al Qaeda is still in Iraq with big force.

I couldn't care less mr. texas, i'm not a wahabi, i don't behead people for saying stuff about religion.

Shia death squads are no diffrent than alqaida. Only a hypocrite would defend one over the other.
The mehdi army and the badr brigades are two terrorist shiite militias who specialize in bombings, cutting, raping, torturing etc. Even women are victims of them so careful who you take as heroes.

Iraq, Syria or Lebanon ....... war torn countries because Sectarian affiliation supersedes National affiliation. Shiite extremists follow Iran, Sunni extremists follow KSA, minorities try to shelter themselves under dictators or seek protection of the strong. And Dictators get away being so under the slogan of resistance or religion. What a pity.

texas dont waste your time with someone with no intellect, all the facts you have stated are true. yo think ths clown knows anything about iraq. only his propaganda. but i must those iraq sunnis were betrayed by the shias just how it has happened here in lebanon. the moral of the story is never the shia

hey souther it was your buddies the shia in iraq that came on the top of the us tanks, and lets not forget sistani forbidining shia to fight the americans. you shia scum were killing each other by the hundreds to get power. all of you hezb iran can never reply to this, jst deny it and call us american agents.