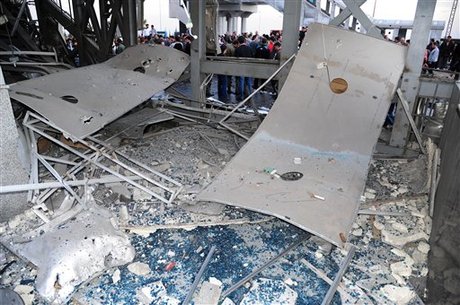 Four people were killed on Tuesday in a suicide bombing in central Damascus, hours after jihadists and other rebels seized a historic Christian town north of the capital.

State television said the suicide attack in the Jisr al-Abyad neighborhood killed four and injured 17, and the Syrian Observatory for Human Rights said it appeared to have targeted a government building.

An Agence France Presse photographer at the scene said the bomber had blown himself up at the entrance of an administrative building belonging to the army, which was used to facilitate aid to the families of soldiers killed in combat.

Footage of the scene broadcast by state television network Al-Ikhbariya showed the ground littered with rubble and broken glass, and at least one body in front of the building.

North of the capital, rebels exchanged fire with government troops outside Maalula, a day after opposition forces captured the Christian hamlet in the strategic Qalamoun region.

The small town is renowned as a symbol of the long Christian presence in Syria and is famous for the fact that many residents still speak the ancient language Aramaic, which Jesus Christ is believed to have spoken.

"There are some exchanges of fire with army forces outside the town, but there is no major fighting and the opposition controls Maalula," Observatory director Rami Abdel Rahman said.

Rebel forces, including the jihadist Al-Nusra Front, swept into Maalula from the surrounding hills after rolling explosive-laden tires onto regime troops below.

Most of Maalula's 5,000 residents fled in September, when rebel forces first entered the town before being pushed back to its outskirts by the Syrian army.

On Tuesday, religious officials told AFP 12 nuns were taken from a convent in Maalula to the nearby rebel stronghold of Yabrud. It was not immediately clear whether the nuns had been kidnapped or merely evacuated for their own safety.

Meanwhile a military source told pro-regime daily Al-Watan that regime reinforcements were headed to Maalula to "cleanse it of terrorists."

The rebel capture of Maalula comes amid a regime advance elsewhere in the surrounding Qalamoun region, where government troops have taken the towns of Qara and Deir Attiyeh.

They have also seized 60 percent of the biggest town in the region, Nabuk, and the Observatory said fierce clashes continued there on Tuesday, with two men and a woman killed by regime shelling.

Nearly 126,000 people have been killed in 33 months of fighting in Syria, according to the Observatory, and the U.N. human rights chief said Monday there was evidence of both war crimes and crimes against humanity in the conflict.

"The evidence indicates responsibility at the highest level of government, including the head of state," U.N. human rights chief Navi Pillay said in Geneva.

It was the first time evidence by a U.N.-mandated commission has directly implicated President Bashar Assad in crimes committed during Syria's civil war.

The four-member U.N. investigative team, which has been probing rights violations since shortly after fighting broke out, has accused both the regime and the rebels of war crimes.

For the first time however, they have now produced a long and confidential list of suspected perpetrators.

Pillay told reporters in Geneva the names would remain sealed until they could be provided to a "credible" investigation, and reiterated her call for the case to be handed over to the International Criminal Court in The Hague to ensure accountability.

Meanwhile, with the onset of winter, aid agencies warned of the danger posed to some 2.2 million Syrian refugees in neighboring countries, while Oxfam launched a "12 Days of Giving" appeal to help refugee families in Jordan and Lebanon.

The United Nations says it has registered more than 2.2 million people who have fled Syria since the conflict broke out in March 2011. Millions more have been displaced inside the country.

UNICEF said the situation is especially precarious in Lebanon, where thousands of families are living in informal tent settlements on flood-prone land.

"Millions of displaced Syrian children have had to find safety under what are, frankly, inadequate living conditions," said Maria Calivis, UNICEF head for the Middle East and North Africa.

bravo. is that the best they can do? such cheap and cowardly attacks are as good as a public acknowledgment of their defeat.

now watch as the SAA steamrolls them in total indifference of syrians and the entire world, because nobody cares about cheap suicidal maniacs from the middle ages

My opinion on it mr. action, don't dwell on the past, and especially not the Civil war that never made sense. Think about the future, and that is Al Qaeda if you don't wake up soon.

Is it possible to hate both sides equally?

HEY! I have Shia and Christian friends ... But I hate Nissrallah with a passion ... Nissrallah and the Saudi king are Zionist ... Wake up to the game you are been played with you fool...
AND Mystic! It's Labayka Allah!!!... You a mushrik or a Muslim?