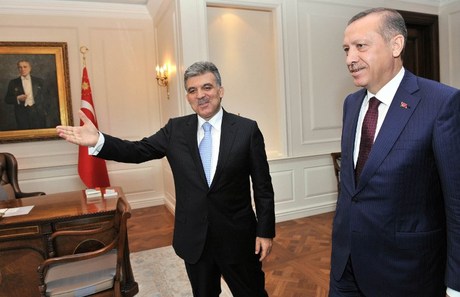 Turkish Prime Minister Recep Tayyip Erdogan saw President Abdullah Gul late Wednesday amid expectations he was about to reshuffle his cabinet following the resignation of three ministers amid a high-level graft scandal.

Gul said Tuesday that Erdogan was preparing to replace several of his ministers. On Wednesday, Turkey's interior, economy and environment ministers quit the government, with the latter also calling on Erdogan to step down.

After announcing his own resignation, Environment Minister Erdogan Bayraktar raised the stakes by calling on Erdogan to follow suit. It marks the first time Erdogan has faced such a challenge from a minister in his own Justice and Development Party (AKP).

"I am stepping down as minister and lawmaker," Bayraktar told the private NTV television. "I believe the prime minister should also resign."

The sons of both ministers are among the two dozen people who have been charged as part of a wide-ranging bribery and corruption probe that has ensnared close government allies and top businessmen, including the chief executive of state-owned Halkbank.

Bayraktar's son was also detained last week, but has not been formally charged and has been released pending trial.

Those caught up in the police raids are suspected of numerous offenses including accepting and facilitating bribes for construction projects and illegally smuggling gold to Iran.

Erdogan, who has led Turkey since 2002 as the head of a conservative Islamic-leaning government, has described the probe as "a smear campaign" against his government.

In a televised speech on Wednesday, he did not comment on the ministers' resignations. Instead, he again blamed the probe on "a conspiracy" and "international powers" and insisted the AKP had a clean record.

Observers say the investigation has exposed a rift between Erdogan and former ally Fethullah Gulen, a Muslim cleric who lives in the United States and whose movement wields considerable influence in Turkey's police and judiciary.

In his resignation statement, Bayraktar pointed the finger at Erdogan, saying the vast majority of construction projects mentioned in the investigation were carried out with the premier's approval.

"It's the prime minister's natural right to work with or remove whichever minister he would like to," he told NTV in a live broadcast.

"But I don't accept any pressure to resign over an operation involving bribery and corruption... because a big majority of construction plans in the investigation dossier were carried out with the approval of the prime minister."

The television network then cut the live feed in a move that immediately raised a stir on Twitter, with critics slamming it as censorship.

In another blow to Erdogan, former interior minister and current lawmaker Idris Naim Sahin, a predecessor to Guler, also tendered his resignation.

He said government polices had provoked "hostile and discriminatory sentiments in society, caused a loss of self-confidence... and disappointment."

Meanwhile, in an apparent widening of the graft investigation, prosecutors in Ankara said they had opened a probe into the national rail authority over corruption claims in public tenders. No arrests have yet been made, the prosecutor's office said.

The political tensions of the past days have hurt the already slowing Turkish economy, pushing the national currency to hover around record lows against the U.S. dollar.

Erdogan has responded to the investigation by sacking dozens of police chiefs.

Caglayan kept up the government's defiant stance in his resignation announcement, declaring that the investigation was "clearly a hideous plot against our government, our party and our country."

"I am stepping down from my post as economy minister so that this ugly game targeting my close colleagues and my son will be spoiled and the truth will be revealed," he said.

Both Caglayan and Guler have rejected the bribery accusations against their sons.

The corruption scandal engulfing the country has angered citizens, thousands of whom took to the streets of Istanbul on Sunday calling on the government to step down.

Erdogan's image was already bruised by a wave of anti-government protests in June that were sparked by plans to raze an Istanbul park.

Muslim cleric Gulen has denied being behind the graft investigation. His reported dispute with Erdogan is thought to be linked to government plans to shut down a network of Gulenist schools, a major source of revenue for the group.

Gulenists were previously key backers of the AKP, helping it to win three elections in a row since 2002.

Turkey's local elections on March 30 are now being seen as a key indicator of where the political fault-lines lie throughout the country.

Three down, how many more to go?

Learn from the Americans funnel and hide the bribes through shell corporations.