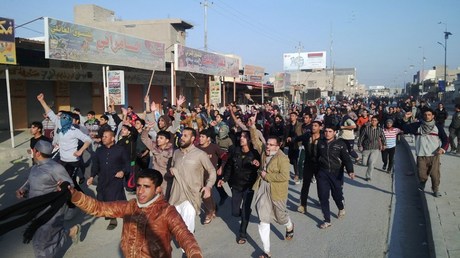 Iraqi security forces killed 10 gunmen in clashes that broke out in the Ramadi area as they tore down a year-old Sunni Arab anti-government protest camp on Monday.

As the fighting raged, mosques exhorted followers to "go to jihad," or holy war, while gunmen later replaced security forces on some streets in the city of Ramadi, near the protest site.

The violence, which came just days after a deadly raid on the home of a Sunni lawmaker in Ramadi, threatens to escalate widespread anger among Iraq's Sunni Arab minority.

In a protest move, forty-four MPs announced their resignation after the government's step.

The announcement was made at a televised news conference at which the MPs also demanded "the withdrawal of the army... and the release of MP Ahmed al-Alwani," who was arrested on Saturday.

Another operation at a Sunni protest camp outside the northern town of Hawijah on April 23 triggered clashes in which dozens of people died, sparking a wave of revenge attacks and sending death tolls soaring.

An Agence France Presse journalist in Ramadi reported heavy fighting, and saw helicopters firing into the area of the protest site, where demonstrators had gathered for more than a year.

Sporadic clashes continued, and gunmen could be seen on some Ramadi streets, while security forces were visible at the edge of the city.

The fighting also spread to the nearby city of Fallujah, one of the hubs of the insurgency that followed the 2003 U.S.-led invasion of Iraq.

This was done "without any losses, after al-Qaida and its members escaped from the camp to the city, and they are being pursued now," Moussawi told Agence France Presse.

He was repeating an assertion made on December 22 by Maliki, who said "the sit-in site in Anbar has turned into a headquarters for the leadership of al-Qaida."

Maliki called on "those who are with them in this place who refuse sabotage and who have legal or illegal demands... to leave these camps, and leave this place, so that al-Qaida stays alone."

Protesters had a "very short period" in which to leave, he added.

The sprawling camp, on the highway that leads to Jordan and Syria, included a stage from which speakers could address crowds, a large roofed structure and dozens of tents.

Numbers of protesters there ranged from hundreds during the week to many thousands on some Fridays when the Muslim weekly main prayers are held.

In December 2011, guards of vice president Tareq al-Hashemi, another prominent Sunni politician, were arrested and accused of terrorism. Hashemi fled abroad and has since been given multiple death sentences in absentia for charges including murder.

The demonstrations tapped into long-standing grievances of Sunnis, who say they are both marginalized by the government and unfairly targeted with heavy-handed tactics by security forces.

In another incident that has escalated tensions, security forces on Saturday raided the Ramadi home of Sunni Arab MP Ahmed al-Alwani, who backs the anti-government protesters, arresting him and sparking clashes that killed his brother, five guards and a security forces member.

Sunni discontent has been a key factor in the escalating unrest this year, boosting recruitment for militant groups and eroding cooperation with security forces.

But while the government has made some concessions aimed at placating Sunni Arabs, including freeing prisoners and raising the salaries of anti-Qaida fighters, underlying issues remain unaddressed.

Nationwide death tolls from violence have reached a level not seen since 2008, when Iraq was just emerging from a brutal period of sectarian killings.

The violence continued elsewhere on Monday, with nine people, among them three security forces members, killed in attacks.

More than 6,750 people have been killed in violence since the beginning of the year, according to AFP figures based on security and medical sources.

-iraqi soldiers with uniform hitting themselves in shia procession
https://www.youtube.com/watch?v=9K3jOPsp_bY

-khomeynist in iraqi army arrested MP Awlani, violating his immunity, killed his brother for no reason, and posted this picture.
https://twitter.com/MoonNor27/status/417014987119271937/photo/1

I never thought i'd regret Saddam, but I kinda do now.

i forgot one of the best, maliki asking for karbala to be the new qibla.
happy he'll soon finish his term...

nothing to answer mystic ? keep voting me down with ur multiple accounts...

The only real iraqi national army was dismantled in 2004 by ayatollah-kissing paul Bremer. Now they have a khomeynist-dominated militia, that was also the iranian plan for our LAF.

cedre, you always say that Hezbollah has to fight 2 fronts. Now guess what, your beloved takfiris are being squeezed between Syria and Iraq now.

mostiko, Maliki is already retreating, all Anbar tribes united against him, even shia like Moqtada Sadr is again his sectarian attacks.
Some shia tribes support al Anbar youth.

liberated with by US with iranian help, where those 2 not enemies ?