Report: Contacts Ongoing to Persuade Pope to Visit Lebanon in May 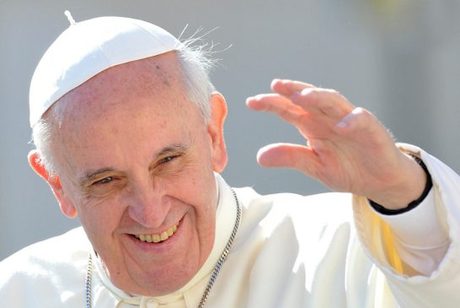 Pope Francis expressed readiness to visit Lebanon during a trip planned to the Holly Land, al-Joumhouria newspaper reported on Monday.

According to the daily, contacts are ongoing with the Vatican to convince the pontiff to make a brief visit to Beirut during his first trip to the Holy Land, visiting Amman, Bethlehem and Jerusalem in May.

Maronite sources recently voiced hope for a possible trip to Lebanon to preach reconciliation in the region.

On Sunday, Pope Francis told crowds gathered in St Peter's Square for the traditional Angelus prayer that he will carry out a “ pilgrimage to the Holy Land from May 24 to 26.”

Francis said the date of the announcement -- January 5 -- was significant because it "commemorates the historic meeting between pope Paul VI and patriarch Athenagoras I of Constantinople", 50 years ago.

Francis said he would hold an "ecumenical meeting with all the representatives of the Christian Churches in Jerusalem" at the Church of the Holy Sepulchre in east Jerusalem, which encloses the sites where Jesus is believed to have been crucified, buried and resurrected.

Among those attending, he said, would be the current patriarch of Constantinople, Bartholomew.

The assembly of Catholic bishops in the Holy Land warmly welcomed the announcement, expressing confidence that the trip would not be only an international event, but "mainly a message of love and brotherhood to all" those living in the countries Francis visits.

Francis was invited to visit the Holy Land by Israeli President Shimon Peres and Palestinian president Mahmoud Abbas, who said he would "walk in the footsteps of Jesus Christ".

The 77-year-old pontiff has made many appeals for peace in the Middle East. During his meeting with Abbas, he called for "a just and lasting solution" to the conflict between Israelis and Palestinians.

Reacting to Sunday's announcement, Abbas said the visit could "contribute to easing the burden of the Palestinian people who aspire to freedom, justice and independence," the Palestinian news agency Wafa reported.

The pontiff's visit had been anticipated by the Israeli newspaper Yediot Aharonot, which said Francis would celebrate a high mass in Bethlehem, the traditional birthplace of Jesus.

The daily said Israeli authorities were unhappy with the brevity of the visit and the fact that the prelate will not celebrate mass in Israel, but in the West Bank, which is part of the Palestinian territories.

Francis made no mention of plans to hold a mass in Bethlehem in his Sunday announcement.

Unconfirmed information from Roman Catholic sources in the Holy Land had earlier indicated a possible papal visit to a refugee camp for Syrians in Jordan.

The Argentine pontiff's predecessor, Benedict XVI, visited Israel and the Palestinian territories in 2009.

Israel and the Vatican first established full diplomatic relations in 1993, but have been engaged in years of thorny diplomatic negotiations over property rights and tax exemptions for the Catholic Church, which have yet to be fully resolved.

The Vatican used the term "State of Palestine" for the first time in January 2013.

I strongly believe the Pope will come to Lebanon if Aoun asks him to visit.

His holiness the Pope Francis is extremely disappointed by his eminence Am Rahi. Visiting him would mean rewarding him. The Pope is a man of Peace, he doesn't agree when some of his servants side with butchers and assassins. Who will pay for this? Us, Christians of lebanon.

Is it still cold in Kanaada?

The Pope should indeed come to Lebanon - so that all Christians can move on and God willing, unite once and for all.

I mean to offend no one with my comments, and apologize profusely if having done so, I just wanted to say when discussing religious matters it is good to be strong in your faith and belief- but still be respectful of all, even those that you disagree with or that may have offended you with their words. The Blessed Mother teaches that one cannot be a true Christian unless they respect all religions and beliefs and people. I believe that the Blessed Mother, Our Lady of Lebanon, would advocate for peace, even in our discussions amongst one another. I pray for the global consecration of all hearts to that of the Immaculate Heart of our Blessed Mother, through whom we can be united to the Sacred Heart of Jesus. Even if our beliefs do not align, at the very least, together let us pray for peace.