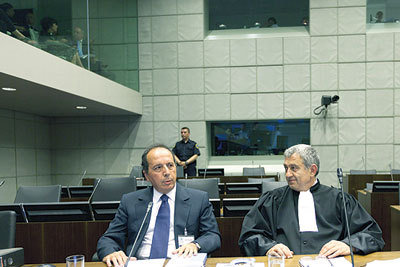 The move could see Sayyed given immunity from prosecution as the U.N.-backed Special Tribunal for Lebanon looks into the Hariri case.

"I can confirm that the government of the Marshall Islands sent us a letter indicating that this person would represent it," Sue Williams, a spokeswoman for UNESCO, the U.N.'s Paris-based cultural agency, told Agence France Presse.

French newspaper Le Figaro had on Monday reported Sayyed's nomination, saying: "Thanks to the diplomatic immunity that would be available to him, the former spymaster would avoid possible prosecution by The Special Tribunal for Lebanon (STL)."

As host of UNESCO, France would need to grant Sayyed a visa to take up his post. A foreign ministry spokesman could not say how Paris would respond to a visa request.

Sayyed was arrested following the death of Hariri and 22 other people in a Beirut bomb attack on February 14, 2005 that was initially blamed on pro-Syrian Lebanese generals.

He was detained for four years but released in 2009 along with three other generals, after the STL said there was not sufficient evidence to keep them.

The trial of four Hizbullah members accused of murdering Hariri opened near The Hague last month, nine years after the huge Beirut blast provoked a political crisis that led to the withdrawal of Syrian troops after a 29-year presence in Lebanon.

The Marshall Islands are a former U.S. territory of around 70,000 residents in the Pacific Ocean.

Why not and the Marshall islands has consitently supported Israel in the United Nations. For example, they were among the handful of countries

They were one of the handful of countries to vote against granting observer status to Palestine.

Be careful here. Before you make any conclusions, look at the history of relationship the Marshall Island and Israel. Then find out if they discuss the offer with the General Jamil Sayyed. Only then draw your conclusions. Though it seems that many of you, posting opinions here, prefer to fight each other and not face your real enemy. If the posting here indeed came from Lebanese people, and you they represent real sample pool of Lebanese society, as an outsider it saddens me. People, please put aside your trivial differences and work on the issues that you have in common. That is how great nations are from. Are you going to continue to defend the bomber and the sectarian agenda while your oil and gas is being pump by your enemies from under your feet?

Strange move in the middle of the STL hearings...

this is a hideous video ibn. but to accuse one side or the other would be pure bias. this could very well be rebels "caricaturing" what they imagine of syrian soldiers.

actually i dont see why syrian soldiers would caricature themselves and make fun of themselves this way. it doesnt make sense. i'm pretty sure it's made by rebels.
in any case, those who did this are not humans, it's disgusting.

he is hiding from prosecution: what does it say to you guys ? :)

I agree texas,he knows that they know everything. Which is why hes running to the ends of the earth.

marshall island is a USA vassal state. it is the same as if the US granted the immunity. it is strange indeed.

Immunity from prosecution? Where? By whom? For doing what? The farce shall continue at the STL and by the MSATEEL of Farts 14 and Sanni First.

And may you be granted permanent residency in Qum.

What about Berri, Junblatt, Hassan, Aoun and several others? In order for our war to end they reached an agreement on this. Otherwise it wasnt in their interest to reach any agreement.

Half the truth as usual:

Forget Gaegae for now karim-m1 and exxplain to us what is going on with Jamil Sayyed. I know you have insider information from Hezb, enlighten us.

How the hell does this guy who ruled Lebanon on behalf of Bashar, butchered and beat Lebanese patriots including AOUNIES (REMEMBER YOU AMNESIC GOLDFISH ???) end up at a post a UNESCO ?

UNESCO is an organisation promoting peace and universal respect for human rights. This is a major insult to humanity.

UNESCO should reject his nomination !