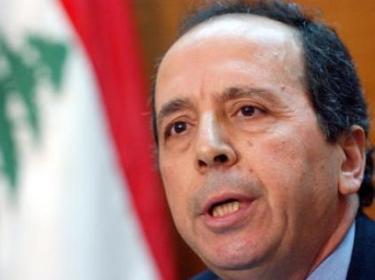 Former General Security chief Maj. Gen. Jamil Sayyed announced on Saturday that he will be “cutting his ties” with the March 8 camp, following the appointment of the former Internal Security Forces chief as the new Justice Minister.

"I announce cutting communication ties with the March 8 camp,” Sayyed said in a released statement.

He explained his stance: “Any political party has the right to nominate any personality to be represented in the new cabinet, including nominating (Maj. Gen.) Ashraf Rifi.”

"But there is no ethical or logical reason that justifies March 8's step of giving away the Justice Ministry,” he added.

"March 8 had recently objected the extension of Rifi's mandate as an ISF chief, and they have toppled the cabinet of former premier Saad Hariri for rejecting to refer the case of the false witnesses to the Judicial Council, in which Rifi was involved.”

He expressed that it isn't the first time the March 8 camp, including Hizbullah and AMAL Movement, “commits a huge mistake.”

"But this time, the entire coalition bears the responsibility of this huge ethical mistake that cannot be politically justified for any reason.”

Sayyed then announced cutting his ties with the camp, but assured that he will commit to its “strategic political path.”

Prime Minister Tammam Salam finally announced on Saturday the formation of a 24-minister cabinet, ten months and a week after his appointment.

The ministers have been distributed equally between the rival March 8 and 14 camps and centrists and Rifi was named as the new Minister of Justice after the March 8 camp objected his nomination for the Ministry of Interior.

Sayyed, spent four years in prison on suspicion of involvement in the 2005 murder of the former prime minister Rafik Hariri. He denies any involvement and claims to have been subjected to arbitrary detention.

What will m8 ever do without his support!

is this guy for real?

Let him go spend his stolen millions in marshall islands...

His existence is a huge mistake. A criminal sectarian and a traitor to his country is lecturing about virtue.

First the Marshall Islands and now M8… Sayyed must feel very lonely. Go to Damascus you will be welcomed there and surely Assad will have a place for one of his faithful stooges. If you stick around you might end up in a prison like your buddy Samaha.

I have a feeling this guy will be dealt with soon.

When it is a national matter, then individuals do not make matter any longer you idiot. Who cares if you cut your ties or not, the country should not be a prisoner of an individual.

Pride cometh before the fall.

In Lebanon, isolation comes right before the car bomb. This guy is looking lost and all alone right now.

But, as much misery as this guy has caused, he is still a human being and should not have his life cheapened by being targeted for elimination. We have seen too many Lebanese who have faced summary execution, many at the hands of Sayyad. To kill him in the way that he has killed others may be karma, but it would only make those of us who have sympathized with the victims to be no worse than the villains, such as Mr. Sayyad.

So Long life Mr. Sayyad. A long miserable life to you.