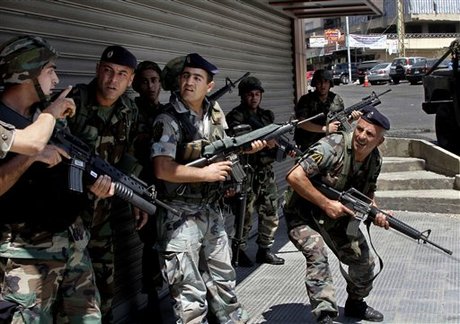 The army intelligence raided on Saturday the house of an extremist in the southern city of Sidon as a Palestinian national was shot dead in the Ain al-Hilweh Palestinian refugee camp.

The state-run National News Agency reported that the army raided the house of Mahmoud Khalaf in old Sidon town, seizing a cache of arms and grenades.

The NNA described Khalaf as an “extremist.”

Serriyeh succumbed to his wounds soon after he was submitted to al-Nidaa Humanitarian hospital at the refugee camp.

The reasons behind the incident are still unknown.

In a separate incident, the car of Ahemd Kaoush was set ablaze in Ain el-Hilweh.

All refugees are causing economic , security and demographic damage . This is unacceptable anymore inhaving terrorist camps , that are armed within a country ! Including closing the bloody borders .
They have a much larger country to spread into , instead of coming into a 10452 km2 area . Please put me as president and I will systematically work on alienating the country from all this damage caused by syrians and Palestinians