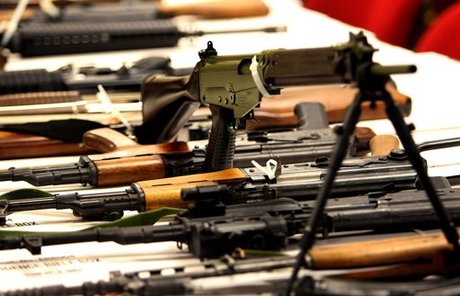 Wasim Tamim and Samir Tamim, who hail from the northern port city of Tripoli, are members of the most prominent movements in the former parliamentary majority, sources said in reference to ex-PM Saad Hariri’s al-Mustaqbal movement.

The men were arrested in Beirut last Friday, they said, adding that they have carried out more than 30 smuggling operations from Beirut to the Syrian city of Banias.

But on Friday, Lebanon's largest company real estate developer, Solidere, issued a statement saying “the Lebanese security authorities are the only sides entitled with the preservation of security, inspection and monitoring at the Beirut Marina.”

The company, which was founded by former Premier Rafik Hariri in 1994 to rebuild downtown Beirut, denied its knowledge or link to any operation of arms smuggling from the facility.

I hope the ISF are as successful with the daily air land and sea iranian arms shipments to the Hizb, which only the Turks seem to seize for the time being!

Thank you Naharnet for publishing the truth . Thank you .

Now you know what is really happening in Syria ....

Bravo the Lebanese army .. Ashraf Rifi and Wissam el Hassan would have never areested them !!! I am sure they knew about all that , and must be part of this organisation .

As if the smugglers need beirut Marina to smuggle weapons to Syria??? Anyway, If i could i would send arms to those being killed in Syria, but I know that is not what they want. They have more arms than they need.... Their uprising is not an armed struggle up till now.The regime would like to paint the uprising as such, but it is not working. Brave people..... we need to learn from them!

This government sees what it wants to see..... They quickly find, arrest, and put on trial those who don't have political cover. What about the smugglers in Hirmil, and the Bekaa valley? What about the weapons in CHiyah and Dahiyeh? Oh, sorry.... i forgot there are no weapons in Dahiyeh as the Amal foreign minister said last week. Double standards..... Failed State..... Surrogate government, puppet regime.... That is Lebanon in a nut shell....

How can Solidere denie they are not controling beirut Marina when they are forbidding St George Owner to access to his own marina!!!

Should We Understand that theses arms were smuggled for Hariri's Mafias and allies like the LF, with all the knowledge of solidere?

But I thought mustaqbul party have no weapons? People who play with fire, get burnt. This mustaqbul movement, must be purged of those who want civil / sectarian conflict in Lebanon and Syria! Next is call Al Qaida for help.

and your mouth should be purged from the smelly crap you keep coming up with, you prejudice little POS! I read sometimes your comments on various matters, and obviously you are an Aouni hateful complexed individual. How the hell did you link Mustaqbal to this story huh?

Bravo to these two guys. Over 2000 innocent unarmed Syrian protesters have been slaughtered while the whole world is just watching and doing nothing. How long do people have to face tank fire with their bare chests before someone throws them a rifle or two.

It is not a crime to come to the aid of a person under fire by providing them a weapon. Indeed, it is no crime to draw fire down upon one who is firing away at an unarmed person. Its called justified homocide, or self defense in the law.

In this situation its called having shared or common humanity.

Again we have some comments reflects a tribal mentality..The brainless people who refuse to admit that arm smuggling to Syria is a crime are the same who fuel the sectarian arguments....I cannot relate the arm smuggling to any internal Lebanese dispute. I acknowledge the right to oppose the Syrian regime but arm trafficking is crime and those traffickers are generating blood money….For centuries we opposed the Syrian intervention in Lebanon. Logically speaking these thugs they want to make easy and fast money and in the same time they will be happy to watch our neighbors plunge into civil war….
Truth, Voyager and Ali your comments are irrelevant and reflect hatred……

But I thought that ado.australia did not believe unnamed new reports. I guess he's just a lying hypocrite.

At least Mr Brain, these arms are not meant to turn against fellow lebanese....You get to the point when people have to be treated in kind, an eye for 2 eyes, not only one eye. I hope this happens to teach them a lesson once and for all, for future generations to see too, how traitors are punished. Nuremberg after nazi Germany wasn' t about hatred but justice! The international tribunal for Yougoslavia too! Human beings are not born just to be slaughter sheep for others to clench to power!

Brainless Le Phenicien.... So You have the guts to comment on this one cos it has something to do with Future huh and something about 14 march.... BUT u had nothing 2 say about the Iranians and Your master hassouna killing soldiers in Syria that refused to shoot on their own ppl.... You are a typical "Animaux" And U know why Animaux? cos One Animal is not enough for You! Shame on YOU AND YOUR LOOK ALIKES !

Some people are very good in picking holes; on the other hand they can’t see the wood for the trees.

so now we can do demarcation line between baath and bilad el arz?because smuggling arms is not in favour of the alawi regime anymore.dont be impatient ,we are just starting,wayyak wayak wil zaman tawil.

"Truth, Voyager and Ali your comments are irrelevant and reflect hatred……"

Thank you for deciding our comments as irrelevant. Obviously some higher authority appointed you God and you decide what is relevant and what is not. You are of the same chemical composition as your leader and Murshid. He also decided on our behalf what is relevant, what is good, when we go to war, which prime minister we appoint, what election law we will have, etc.

Decades instead of centuries

smuggling is not the duty free shop of the lebanese /baathy border?even u can buy thousands of missiles tax free..we will issue a fatwa for special prices in ramadan,especially for houriyat el janna

I'm glad that someone is trying to are the true 'resistance', those fighting against the murderous Assad regime and his Hezbollah lackeys.

Sources? Mein? M8 sources?? Even if this is true, what's so wrong about aiding a true resistance

Why all that fuss?
The arms were returned to the senders.

This goveronment is good when it comes to arresting M14 supporters, but God forbid it lays a finger on M8 thugs.. So pathetic!! We need to take executive power again and this time, clean the house!!

Poor Solidere. They don't inspect. They only steal while nobody inspects! The days of 7amiha 7aramiha are over. Lebanon's Spring is finally a reality. Decent Lebanese, REJOICE.

Mustaqbul...If you read the article you might find how the "hell" I linked this story to the mustaqbul party. Wasim and Tamir Tamin from tripoli are not likly to be LFers! I reject being labeled an aouni. I am not a blind follower of any politician or party But you obviously have identified yourself as a horse with it's blinkers on. Who is trained to look straight ahead at what he is being trained to see.Don't you dare look around you and see what is really happening.You and your party would rather burn Lebanon with sectarian conflict than to see the hariri family business, mustaqbul party losing power and control of the government.

Shame on those happy to see weapons being sent to Syria.This only leads to more killings and chance of the conflict drifting across into Lebanon.Hypocrites are the ones against Lebanese defending against Israel but cheer syrians "resisting" each other. Already over 400 security forces have been killed in the "peaceful" demonstrations in syria.

I'm not against Syrian people wanting freedom, rights and multiple polictical parties. But this is being offered by Assad and the "Syrian opposition" refuses even diologue. Instead we are seeing the beginnings of sectarian war. That's what they want. They chant, "alawite bil taboot and christains to Beirut". The Muslim brotherhood and salafists in tripoli are purly sectarian that want a conflict, and now there caught sending weapons to Syria and the peaceful m14 followers are cheering, thinking this will not affect Lebanon?

@ ado.australia:
Well spoken on you part but little do you know that you're arguing with hypocrites and donkeys. Don't waste your time.

@ ado.australia:
Well spoken on you part but little do you know that you're arguing with hypocrites and donkeys. Save your breath.