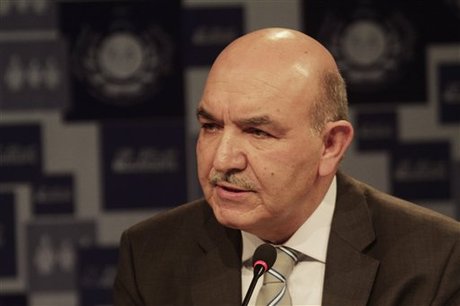 The brother of President Hamid Karzai dropped out of Afghanistan's election on Thursday and endorsed former Foreign Minister Zalmai Rassoul, an announcement seen as signaling the current leader's preferred successor.

The first major move in the election campaign before polling day on April 5 came as a U.S. air strike in the east of the country accidentally killed five Afghan soldiers.

Relations between the U.S. and Afghanistan have become severely strained as NATO combat troops prepare to withdraw by the end of this year, and the latest "friendly fire" incident is set to worsen ties ahead of the election.

The new president faces a testing term in office as the final 55,000 NATO troops depart Afghanistan and the national army and police are left to fight the Taliban insurgency alone, 13 years after the Islamists were ousted from power.

"I and my team, we consider ourselves as a key part of this new alliance and declare my support for Doctor Zalmai Rassoul," Qayum Karzai told a press conference.

Rassoul, a softly-spoken loyalist of Hamid Karzai, said: "From now on, both teams will fight for victory... and I'm sure with the blessing of God, and the support of the people, we will win."

President Karzai, who is constitutionally barred from standing again after serving two terms, has pledged not to publicly endorse any candidate in the election.

"I do see this as a sign that Rassoul is Karzai's preferred choice," Kate Clark, of the Afghan Analysts Network, told AFP.

"Karzai has been very keen publicly to say he has not been supporting anyone, but Karzai loyalists have been backing Rassoul."

One senior diplomat told AFP that Rassoul's campaign was being "propelled" by President Karzai.

The Ghani campaign had hoped to gain the president's covert backing, but analysts say that Karzai intends to retain influence after the election and that Ghani would make a less pliable president.

As Afghanistan prepares for its first democratic transfer of power, the country remains in a parlous condition despite billions of dollars of military and development aid pouring in since the Taliban were ousted in 2001.

Ties between Afghanistan and the U.S., its biggest donor, have deteriorated in a series of public disputes, with President Karzai launching regular verbal assaults against Washington in the final months of the NATO combat mission.

After five Afghan soldiers were killed in the air strike early Thursday in the eastern province of Logar, Karzai's spokesman said the president had ordered an investigation.

"It was not a joint operation and no air support or no air strike was asked by Afghan security forces," Aimal Faizi told AFP. "NATO has to bring clarity about this incident."

Khalilullah Kamal, the Charkh district governor, said he had visited the site of the attack, which he said was from a US drone.

"The post is totally destroyed," he said. "The Americans used to be in that post but since they left, the ANA (Afghan army) took over."

"An investigation is being conducted at this time to determine the circumstances that led to this unfortunate incident," it said.

"Our condolences go out to the families of the ANA soldiers who lost their lives and were wounded... we will determine what actions will be taken to ensure incidents like this do not happen again."

The NATO combat mission in Afghanistan ends in December, though a small number of U.S. troops may stay on for training and counter-terrorism operations if a long-delayed security deal is signed with Washington.

Voting on April 5 is likely to be followed by a run-off election in late May between the two leading candidates, with a new president finally being chosen in June or July.