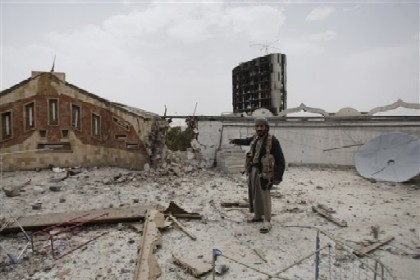 A U.S. drone strike has killed a local Al-Qaida chief and his bodyguard in northeastern Yemen, a tribal source said Wednesday.

The unmanned plane fired a missile at a vehicle transporting militants in the Jebel Jame area, in Jawf province, the source said.

The dead were identified as Moajab bin Aziz and his guard, Ali Hasan Hadhban.

The U.S. military operates all drones flying over Yemen in support of Sanaa's campaign against Al-Qaida and has killed dozens of militants in a sharply intensified campaign in the past year.

The strikes have triggered criticism from rights activists, who say they have killed many innocent civilians.

The United Nations said 16 civilians were killed and at least 10 wounded when two separate wedding processions were targeted in December.

The victims had been mistakenly identified as members of Al-Qaida, the U.N. quoted local security officials as saying at the time.

Following the deaths, Yemen's parliament voted for a ban on drone strikes, but analysts say lawmakers have limited powers and are unlikely to have an impact on Washington's campaign.

Washington says drones are an essential part of its "war on terror".

Yemen is the ancestral home of Osama bin Laden and the home base of Al-Qaida in the Arabian Peninsula (AQAP), which Washington views as the jihadist network's most dangerous franchise.