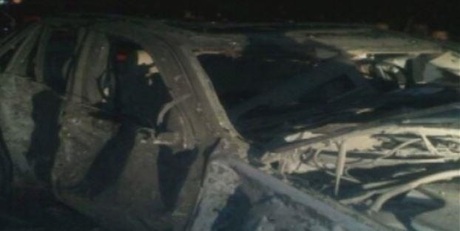 “Hizbullah members knew he was about to carry out the attack, and tried to stop the vehicle. That was when the attacker detonated the vehicle," a Lebanese security source told Agence France Presse.

“The martyrs Abdul Rahman al-Qadi who hails from al-Ain and Khalil Khalil who hails from al-Fakiha detected a suspicious Grand Cherokee, so they chased it and asked its driver to stop, which prompted him to blow it up,” NNA said.

A group calling itself the Baalbek Ahrar al-Sunna Brigade claimed responsibility on Twitter for the bombing.

"Prepare for the transfer of the battle of Yabrud into Lebanese territory," it said.

For its part, al-Nusra Front in Lebanon claimed responsibility for the attack on Twitter, describing it as "a quick response to Iran party's bluster following its extortion of the town of Yabrud."

The attack comes hours after the Syrian army backed by Hizbullah fighters captured Yabrud, a former rebel bastion in Syria near the Lebanese border.

Hizbullah and Lebanese security forces have said many of the car bombs used in previous suicide car bombings originated in Yabrud.

The Lebanese Red Cross said the attack took place near a gas station.

A witness told LBCI TV said “the suicide bomber blew up the bomb-laden car which came from Wadi Rafeq (in Arsal's outskirts) when he was detected by members of a local party.”

Meanwhile, al-Jadeed television said Hizbullah's top official in the town of al-Ain A. Q. was killed in the bombing.

Hizbullah-dominated areas in eastern Lebanon and Beirut's southern suburbs have suffered a series of deadly attacks, many of them suicide car blasts, since the group acknowledged sending fighters into Syria.

keep whining losers. those two heroes knew there was a bomb in that car, and yet they went after it. they gave their lives knowingly to protect innocents. sad that still two residents died, but one can easily imagine what it would have been if the terrorist had had the liberty of choosing a time and place with more people.

no words or amount of hate you can spew can ever take away or even scratch the surface of the honor and sense of sacrifice these two men demonstrated.

Of course now we have to fight the takfiri, and even if they are occuring in hezbollah ladden area those are still lebanese, who do u think u are i was in lebanese ref cross during 2006 war, but that was for lebanon, not for a dictator who is with his familly regime elected democraticaly with more than 98% of votes and brought that much sufferance to my country and to syria...
No i didnot wanted to be dragged in that war spreadding from irak to yemen.. But thanks to hezbollah now we have to deal with it....
Now really bravo u r the only patriotic one and we are all takfiri/zionist/ksa/imperialists...
Please go also have some chupachups...

The heroes that died in todays blast, wont be forgotten. May they rest in peace.

Brain washed sick people. Those who think "heroes died in the blast" must also wish the dead were his own children, mother, father, wife, etc.

all i hear is loser talk and wishful thinking. nusra/qaeda started establishing a presence in lebanon as soon as the syrian "revolution"started. ghosn warned about him, but all m14 did was plunge their heads in the sand hoping the hordes would just vanish if they bent over really low. oh and they played the offended card very loud (http://www.naharnet.com/stories/en/23982)...
HA's intervention saved lebanon, you probably know it, you cant be so dumb as to not see the obvious, but you're just too hateful and spiteful to admit it. whine whine whine, and a great deal of passive inaction, that's all you got.

Sad. I hope no innocent bystanders were injured. Not too sad about the terrorists (A.Q.).

If that is true, then FT has gone to an all time low!!!

Your determination????
Your determination?????
They are dragging the whole country in chaos
What are u talking off????
And please cut off the crap of "they were coming anyway"!!!
Go have some chupachips bi charafak!!!
Good help the innocents who are being victims of this all madness...

habibi go find yourself a terrorist and bend over and enjoy your submission, but dont expect us to do the same. they will be exterminated, whether you like it. stay neutral, or chose your side if you want, but chose carefully, there wont be half-baked measures anymore.

Habbi...how nice..
My familly fought with the patriotic front of national lebanese resistance, i never was in any political party in particular, liked aoun for a while, was in the red cross in 2006 war, but in anyway i never bended over to anybody maybe it is of ur customes...
But eennif i was not, even if i thought i am a phenician, or a socialist, or a communist, or just a simple lebanese i never asked to be a part of the ongoing regional sunni/shia iraki/da3ech/nusra style....
But thanks for ur concern...
Now really go have some chupachups...

I meant chupachups but i guess u alreaddy got it, u'r so smart....

HA may have brought this on themselves, but I am not happy this happened. Do we really want people blowing themselves up in Lebanon?

No we don't but thankx to hezbos now we have them....

All proof indicates the Embassy in 1983 belonged to CIA. You know this American,,

Yes it was a heroic maneuvre i agree that does not take the fact that it was a kamikaze but for a goid cause...
But now no one asked them to go to syria... Back then south lebanon was a national matter, patriotic fromnt idf the national liberation, jumblat,communists shia, sunites...LEBANESE LAND to be liberated, not a dictator from a family of dictators rulling suria democratically wyth each elections more than 98% after all we suffered from syria after all syrian people suffered from those regime and this familly.. (Syrian political opponents like ryad el turc a communist, not takfiri was keept in jail for 18 years for having another political opinion while takfiri like shaker el abssi were released....
Man go have chupachups....

only an ignorant american would think the first terrorist bombing was in 83 in lebanon. and yes, it was full of CIA, by the US's own admissions.

first i never said it is full of spies, you did, out of nowhere (as usual)
second, iran is a friendly country, that never attacked, bombed or harmed us, but rather armed us and helped us liberate our land. whereas the US was bombing us (through their israeli subsidiary that they armed to the teeth and gave full cover to).
third and last, we were in a state of total war, and in no position to take half measures.

Typical takfiris, they can't win on the battlefield, so they do this instead. Real cowards indeed

Thks for dragging them in lebanon... We are very happy to have them in our country because of great hezbollah...
Now go have some chupachups man, really...

One thing is attacking Israelis and US marines, but targeting civilian areas is a whole other case American, you Americans knows all about that with your drone attacks right?

Mystic,
If I recall correctly about 50 Lebanese civilians were killed in the US embassy bombing.
Here is a heroic deed being done by an Iranian Terrorist on Lebanese soil:
The Bombings: Sunday, October 23, 1983. At around 06:22, a 19-ton yellow Mercedes-Benz stake-bed truck drove to the Beirut International Airport (BIA),The suicide bomber, an Iranian national named Ismail Ascari,[13][14] detonated his explosives, which were later estimated to be equivalent to approximately 9,525 kilograms (21,000 pounds) of TNT.

And M8 sheeple have the audacity to call KSA's $3B donation to the LAF an interferemce.

And after we do takfiri chhace in lebanon, and the fun beggins...
Thank you, really...
May all those inocent rest in peace...
Really thanks thanks thanks hezbollah...
I think they should not put "moukawi" in the ministerial statement, they should put "great and only savior: hezbollah"...
Really 1000 thanks
Now nan go have some chupachups...

Sorry was driving...
But enno i think we are now a new place were all the iraki/da3ech/nosra...fun is starting and all thanks to hezbollah...

I only fear my friend that we are alreaddy right into it... Having syrian army /hezbos all around or in and out wont change much i'm affraid...
Hope i'm wrong...

Yes what a victory, i feel really safer in lebanon, thanks nassi...
And please cut up the crap "they were comming anyway" they were just waiting the right moment from chi 30 years...u just get syrian war into lebanon without taking into conssideratuion the opinion of a big part of the population...but anyway thanks to hezbollah they are here..
Thank u hezbollah...
Chupschups for everyone...

Justify??? U think i am happy u bringing sectarian regional conflit in my country?? Should i say thank you???
Who do u think you are thinking that hezbollah can descide of the fate of the all country???..i am a lebanese to, i am with the palestinian cause, i am with syrian revolution, i support bahrani cause and yes i donnot think like u but i donnot dragg u in my wars!!!
Southern really go have some chupachups

@old.school... How do we expect the great syrian army to face israel if they cant even secure qalamoun? Even after HA did all the dirty work. Isnt time for a change in leadership after this sorry show of power?

It is true that the SAA lacked guerilla warfare training, in the beginning of the crisis, but now it is a well prepared Army, they have now experience in rural aswell as urban warfare. The SAA despite their losses, are 10 times stronger than before the conflict.

The Resistance will withdraw from Syria, when their duties and missions are accomplished.

And when will they and the Iranians withdraw from Lebanon?

Even Israeli and American experts and analysts, has admitted that Hezbollah are more experienced and battle hardened now, due to their efforts in this crisis.

Hehe Mr. American you never give up hmm? You really need me to repeat what i said on the Russian related article? Ok then-

I would rather die, than setting foot in the US Mr. American.

You doing standup comedies in the US or something? Sure seems like it.

Haha, American your efforts to get me to the US, can only go down the drain, but you are a funny guy i will give you that.

Quite honestly. I'm tired of the Wahabbis and their Sunni apologists. Let's annihilate them

Allah yerha7mon. The state really needs to do something about this epidemic of terrorism.

It was a dispute between two car dealers