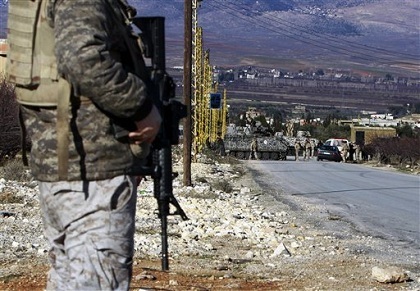 A wanted terrorist left the northeastern border town of Arsal as Lebanese authorities took a firm decision on the deployment of the army in the village, al-Akhbar newspaper reported on Thursday.

Sheikh Mustafa al-Hujairi is the leader of an armed group that provides logistical support to al-Qaida linked networks Jabhat al-Nusra, the Abdullah Azzam Brigades and the Islamic State of Iraq and the Levant (ISIL), the daily said.

His 200-member group, includes people who work in providing aid to Syrian refugees through a mosque and clinic run by al-Hujairi, it said.

According to the daily, the network also includes suspects who have in the past years been involved in several security incidents in and around Arsal.

Al-Hujairi and many of his aides are wanted by security forces for involvement in car bombings, murders and for firing rockets on towns in Bekaa's north, al-Akhbar said.

It quoted security sources as saying that the Sheikh left Arsal after receiving a message from a Lebanese official that the law enforcement decision has been taken by authorities and “there is no going back.”

The official allegedly warned him that “his fate was at stake.”

But the security sources said al-Hujairi could still be hiding in the town.

They quoted him as telling the Arsal municipal chief around ten days ago that he would hide in the barren mountains of the town.

Al-Akhbar said that Interior Minister Nuhad al-Mashnouq informed several officials, who attended a security meeting at Baabda Palace on Wednesday, about reports that al-Hujairi had left Arsal ahead of the army's deployment there.

The army deployed in the town on Wednesday, reopening the main road after its closure heightened sectarian tension across the country.

Mostly Sunni Arsal had been sealed off by residents from the mainly Shiite neighboring town of al-Labweh, where one person was killed last week by rocket fire.

The closure of the main road out of Arsal prompted fury among Sunnis in other parts of Lebanon, and many took to the streets on Tuesday night to burn tires in protest.

Good. We need his expertise to blow up as many Hezbollah/SSNP operatives as possible.

Is it possible that Nasrallah agreed to shelter him in one of his vast underground tunnels?

who is this official that warned him? and what has been done about him? at least the Iraqis demanded an investigation and accountability for the MEA incident...keen to know.

Probably went to fight in syria.

Al-Hujairi and many of his aides are wanted by security forces for involvement in car bombings, murders and for firing rockets on towns in Bekaa's north.
Can't make that up and stand.

did they post pictures of iraqis pretending they were lebanese ?
do they do syro-iranian propaganda? rhetoric questions of course...

hehehe! he is due for parole soon:)))

Find him, torture him, hang him.