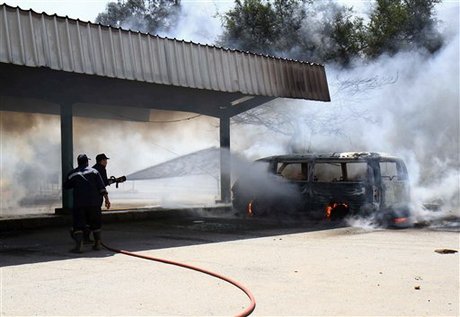 The violence came as registration of candidates for the May 26-27 presidential election entered its second day, with former army chief Abdel Fattah al-Sisi, who led Morsi's ouster last July, widely expected to win.

At least 31 people were hurt when students of Al-Azhar University's branch in the southern city of Assuit clashed with security forces, officials said.

Fighting was also reported at Cairo's Ein Shams University, while police fired tear gas in the Mediterranean city of Alexandria and in the central city of Mansoura as pro-Morsi students clashed with security forces.

Two people were wounded in similar fighting in the Nile Delta city of Damanhur.

Violence erupts regularly at universities, which Morsi supporters use to challenge the military-installed authorities.

In a separate incident in Damanhur on Tuesday, three Sisi supporters were hurt by pro-Morsi students.

The two groups clashed when Sisi's supporters had gone to register their backing for his presidential candidacy.

Every candidate has to procure the signatures of at least 25,000 backers to formally register for the election.

At least 1,400 people have been killed in street clashes, mostly Islamist supporters of Morsi, since his ouster, rights group Amnesty International says.

Morsi's Muslim Brotherhood has been declared a "terrorist organization" by the authorities and by Saudi Arabia.

On Tuesday, British Prime Minister David Cameron said he had ordered an investigation into the Brotherhood over concerns the group is linked to violent extremism.