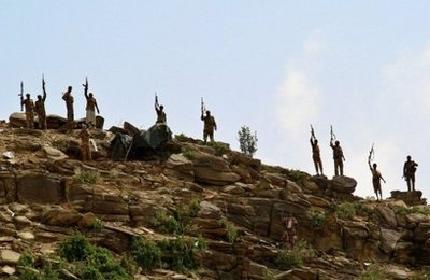 The United States is the only country that operates drones in Yemen, and President Abdrabuh Mansur Hadi has defended their use, despite criticism from rights groups who deplore civilian casualties.

On Sunday U.S. drones fired "several missiles" into a training camp run by al-Qaida in the Arabian Peninsula (AQAP) in the rugged Wadi Ghadina region in the southern province of Abyan, a tribal chief said.

"More than 30 members of al-Qaida were killed and many others wounded," near al-Mahfad town, he said.

Abyan lies next to Shabwa province, another region of Yemen where al-Qaida is entrenched.

Witnesses also said that a U.S. drone carried out the attack and that the most of the wounded were evacuated by members of the Islamist network.

On Saturday a drone strike in the central province of Baida killed 10 al-Qaida suspects and three civilians, according to the official Saba news agency. It did not say who carried out the attack.

After that strike, al-Qaida militants cordoned off the area and evacuated dead comrades, tribal sources said.

They said all those killed on Saturday were low-ranking militants from the region.

An official statement on Saba said the dead were "dangerous elements" who had been plotting to carry out "attacks on vital installations and on politicians and military personnel" in Baida.

The statement said the suspects were also responsible for the murder of Baida's deputy governor on April 15.

"We will continue to raise the banner of Islam in the Arabian Peninsula and our war against the crusaders will continue everywhere in the world," he said in the video posted online.

Al-Qaida usually uses the term crusaders to refer to Western powers, especially the ones which have intervened militarily in Muslim countries, mainly the United States, Britain and France.

Last month Yemen's president defended the U.S. use of drones against al-Qaida in his country, despite criticism from rights groups.

Drone strikes "have greatly helped in limiting al-Qaida activities, despite some mistakes which we are sorry about," President Hadi told the pan-Arab Al-Hayat daily in an interview.

Hadi insisted the use of traditional warplanes against the militants could cause "much bigger losses."

His comments had come after parliament -- despite its limited powers -- voted to ban drone strikes in response to attack in December that hit two separate wedding processions.

The United Nations had said 16 civilians were killed in those strikes.

The United States says the drone attacks are an essential part of its "war on terror" because it allows it to target al-Qaida without the use of ground forces in lawless areas, where authorities have no sway.

But rights watchdogs have criticized the drone program in Yemen and other countries and repeatedly urged the U.S. administration to investigate strikes in which civilians have been killed.

Yemen is the ancestral home of Osama bin Laden and the home base of AQAP, which has been linked to a number of failed attacks on American soil.

The group, branded the most dangerous of the al-Qaida franchise by Washington, has taken front stage since the 2011 uprising that forced veteran president Ali Abdullah Saleh to step down.

It's exactly like going to war, but without having to declare a war or acquire and maintain public support.