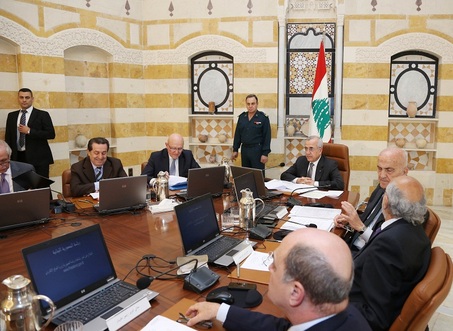 The cabinet on Friday appointed five new governors and accepted the resignation of Governor of Beirut and the North Nassif Qaloush, which he had submitted following reports about him being involved in a sexual harassment case.

The ministerial session, which was held at Baabda Palace and chaired by President Michel Suleiman, appointed Fouad Fleifel as governor of Mount Lebanon, Ziad Shbib as governor of Beirut, Imad Labaki of the northern Akkar region, Ramzi Nohra of the North, and Bashir Khodr as governor of Baalbek-Hermel in the Bekaa.

Industry Minister Hussein Hajj Hassan congratulated the residents of Baalbek-Hermel and of Akkar on the appointments of two new governors in these regions, "after years of vacuum in these post."

As well, the ministers agreed on accepting the resignation of Qaloush, which he had submitted the day a video in which he appeared to be sexually harassing an employee went viral on social media websites.

The video showed the former governor apparently sexually harassing Hoda Sankari in his office when she was asking him to sign a contract related to her job in the northern municipality of al-Mina.

Friday's cabinet session was supposed to take place at the Grand Serail but was held at Baabda Palace instead because “of a problem that came up and which is related to the appointments,” a ministerial source told the Central News Agency.

At the beginning of the ministers' meeting, Suleiman stressed the importance of the anticipated presidential vote and voiced hope that choosing the next head of state will take place in the upcoming parliamentary session.

"Even if this required several rounds of votes, we hope a president would be elected because this is what true democratic practice is about,” he expressed.

"58 million USD were dedicated to improve the roads in Jal El Dib and a ministerial committee was tasked, along with the Council for Development and Reconstruction, to bring forward suggestions regarding possible options in this regard," Information Minister Ramzi Jreih revealed after the session.

When the ministerial session kicked off on Friday afternoon, Jal El Dib residents took to the streets and threatened to block the highway if the ministers did not adopt a decision to fund a tunnel in the region.

Jreij also announced that a draft law worth 24 million USD was adopted to open a road that links the remote Lebanese town of Tufail to the country.