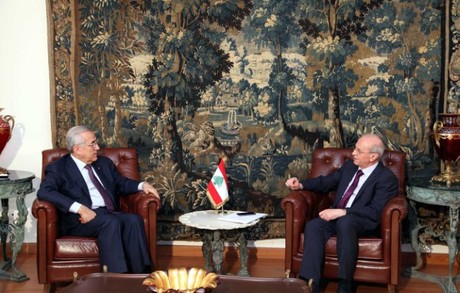 President Michel Suleiman requested that General Prosecutor Judge Samir Hammoud explain to the Special Tribunal for Lebanon the country's commitment to freedom of the media.

He requested that he explain the extent to which Lebanon respects laws on the freedom of the media.

The president made his request after holding talks with the general prosecutor on the STL's summons of al-Jadeed television and al-Akhbar newspaper journalists on charges of “contempt and obstruction of justice.”

Suleiman also asked Hammoud to inquire about the extent to which Lebanese laws fall in line with the summons.

The STL's spokesperson Marten Youssef said via Twitter on Wednesday that the journalists' trial will take place before an independent judge.

Information Minister Ramzi Jreij said of the summons: “Investigations with al-Jadeed and al-Akhbar will prove their innocence.”

He warned the two journalists of failing to appear before the STL's hearing, saying: “This move will lead to repercussions including the issuance of arrest warrants.”

Several lawmakers voiced their solidarity on Wednesday with the journalists and slammed the STL for its actions.

Hizbullah's MP Hassan Fadlallah said that the move is an assault on the freedom of the Lebanese, warning: “Any journalist uncovering the corruption of the tribunal will have the same fate as al-Khayat and al-Amin.”

In April last year, a list of 167 names of so-called witnesses for the former premier Rafik Hariri trial was published by a previously unknown group identified as "Journalists for the Truth".

The STL, established at Lebanon's request, seeks to try five members of Hizbullah for the attack that killed former PM Hariri and 22 others on February 14, 2005, in Beirut.

last i looked, Lebanon criminalized a private citizen for expressing his
personal view on his private facebook wall.

Is this appeasement of the Iranian militia, or does he really not understand the difference between "freedom of the press" and witness tampering?

1. Notify the murderers or Hariri, Gemayel, Tueni, Kassir, Hawi, Eid, Al Hassan, and Chatah of the people who could help convict them of their crimes, and place these witnesses as targets for assassination.

2. Intimidate the witnesses, in an attempt to prevent their testimony. These witnesses agreed to testify under the promise of anonymity, so that their lives would not be put in danger from execution by the Iranian terrorist militia. This intimidation and publishing of confidential witness names is called "witness tampering", and there are laws against it in all civilized countries.

southern - whenever things are not your way- they are corrupt and unworthy- a prevailing mentality suffered by most of humanity- cheers - you are not alone!

Suleiman Asks General Prosecutor to Explain to STL Lebanon's Commitment to Freedom of Media.........
There is no Freedom of Media in Lebanon. Our Media serves Political Parties who in turn serve foreign interests. It is all bought and paid for. In this case Pro-HA media is working to sabotage the STL efforts by releasing names of witnesses and hence intimidating them.

Maybe the General Prosecutor could also explain freedom of media to Iran... i mean Hezbollah.

When their raid media organisations.

When they murder journalists.

When they block roads over satire and comedy.

Someone should remind them that this is Lebanon ! Not Iran. And they, like any other citizen answer to Lebanese laws !

@Southern : Had the STL not existed and these trash journalists done the same with Lebanese court, they would have faced the same charges!

@Southern : when it comes to journalism, please shut up ! There is nothing journalistic about these 2.

And people who's freedom of expression model is Iran and Syria should shut up ! Especially when they are the prime suspects in the death of this counties' leading journalists.

it doesnt matter if its fake/corrupted or not, what matters is its goal...getting rid of a leech that is sucking lebanon dry..
wishing it all the success it deserves!