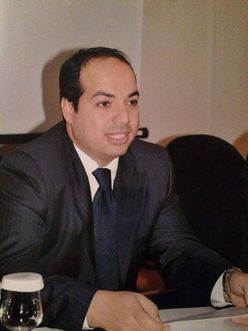 The speaker of Libya's General National Congress confirmed Ahmed Miitig as the country's prime minister Monday, after approving his appointment following a chaotic session of the interim parliament.

"Ahmed Omar Miitig was appointed head of the transitional government, and asked to form his cabinet and present it to the GNC for a confidence vote within 15 days," said the text of a decision signed by speaker Nuri Abu Sahmein.

A deputy, Tahar al-Mokni, told AFP the decision to name the 42-year-old businessman as premier had been signed by Abu Sahmein, who did not attend a Sunday night session of the GNC to vote on his appointment.

Abu Sahmein has not been seen in public for weeks, and some MPs have demanded his resignation over suspected involvement in a "moral" scandal.

The GNC indicated he was abroad for unspecified treatment.

It is unclear if Abu Sahmein's decision to appoint Miitig will end a political and legal dispute over his election after it was rejected by several MPs and the deputy speaker, Ezzedine al-Awami.

Contacted by AFP on Monday, the spokesman of the outgoing government, Ahmed Lamine, was unable to comment on the GNC decision.

Miitig had secured 113 votes in the GNC on Sunday night, but needed 120 to be declared the country's new prime minister in accordance with the constitution, said the government's official website.

But in another statement posted on the website, Awami had declared the vote of confidence on Miitig as prime minster as "void and illegal".

It followed an earlier chaotic session of the General National Congress.

After the initial vote count, GNC official Salah al-Makhzum said Miitig had in fact clinched 121 votes in the 185-seat interim parliament, apparently after a recount, and beat challenger Omar al-Hassi, a university professor.

Some deputies denounced the recount, which they said took place after the session had officially closed.

Since Gadhafi's ouster, successive governments in the oil-rich North African country have struggled to impose order as heavily armed former rebel brigades have carved out their own fiefdoms and refused to join the security forces.

Miitig has vowed to rebuild state institutions, namely the army and police.