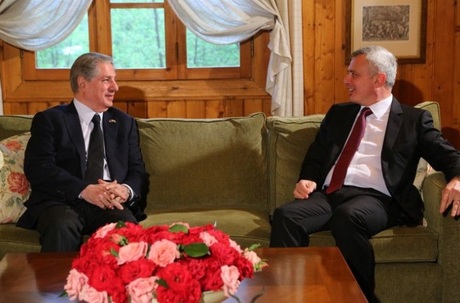 Kataeb leader Amin Gemayel met with Marada Movement chief MP Suleiman Franjieh on Thursday as part of his initiative to resolve the presidential crisis amid a report that Maronite leaders would hold talks in Bkirki next week.

The two officials stressed the need to hold the presidential elections before the term of President Michel Suleiman ends on May 25.

Gemayel added after the talks at Franjieh's Bnachii residence: “Lebanon's future depends on whether we are successful or not in staging the elections.”

“The country will head towards the unknown should vacuum arise in the presidency,” he warned, while questioning how some officials' can make light of a vacancy in the country's top Christian post.

For his part, Franjieh stressed the need to elect a strong president, who represents that majority of Christians.

He noted however that the deep political divide between the various parties will make it difficult to elect a president before May 25.

The two men met over dinner at the former president's residence in al-Metn neighborhood of Bikfaya.

Jumblat assured that he is holding onto the National Struggle Front candidate's for office, MP Henri Helou.

"There is a huge rift between the March 14 and March 8 coalitions,” he told al-Manar television in the evening, stressing that the required quorum for holding a parliamentary session to elect a new head of state is a two-third of the number of MPs, not a simple majority.

Gemayel has so far met with Lebanese Forces chief Samir Geagea, the March 14 alliance's only candidate for the presidency, and his rival Free Patriotic Movement leader MP Michel Aoun.

The lawmakers of Aoun's Change and Reform bloc and MPs from other March 8 alliance blocs are boycotting the elections over lack of consensus on a candidate.

But the lack of quorum they are causing is a message to March 14 that they reject the victory of the camp's candidate.

An Nahar daily said Gemayel's initiative could lead to summit talks between the top Maronite leaders under Maronite patriarch Beshara al-Rahi in Bkirki on May 16 or 17.

The presidency is reserved for Maronites under the National Pact of 1943.

Gemayel announced from Rabieh on Wednesday that he agreed with Aoun on the importance of holding the elections by May 25.

"Gemayel announced from Rabieh on Wednesday that he agreed with Aoun on the importance of holding the elections by May 25"... really, May 25 of what year?

Aoun does not understand that the FPM & the rest of the M8 blocks have to show up and vote for someone, for an election to take place.

How does Geagea represent the Christians with his 5 MPs, one of which was giftwrapped in the Chouf by the PSP (i.e. Druze) vote?

Well Karim ... At least the m14 are not the ones preventing the Parliament from meeting.

And then he left his men and ran while they got massacred! Good job!

Karim
Please get rid of the wahabi complex as we;; as blame the others complex. You should really answer in a relevant way to my reply and refrain from playing the M8 M14 mutual blame. I find it lame. Let's concentrate on the Aoun issue
1- I repeat Aoun hac nothing to do with diplomatic relations with Syria it was Sarkozy who engineered it in return for Bashar supporting sleimane for President
2- Do you really think that Syria today despite its army gone from Lebanon does not exert influence in Lebanon?? As a matter of fact it has more influence now thanks to Aoun being its stooge.

karim
you seem to have a very short memory. Let me refresh you
1- Aoun was lambasting Syria during his exile in Paris
2- Lahoud was the go between Aoun and Assad.
3- Aoun all of the sudden changed policy and started supporting Syria in return for Assad "allowing" him to return to Lebanon
So please stop this non sense of giving credit to Aoun for things he has supposedly done.
Aoun has done nothing good to Lebanon and is basically a spoiler on the Lebanese political scene.
May I remind you that Sarkozy was the architect of the exchange of ambassadors between Syria and Lebanon. the lunatic was not even involved in it
So please review facts and stop this nonsense of giving Aoun credit for things he has never done
Moreover please stop your obsession of the wahabi alliance. I am no supporter of the turbaned dudes but please don't blame everything on them either

also you claim there was nothing left to resist them Syrians?
again check the facts dude Syrian influence actually never diminished despite the fact the Syrian army left Lebanon. in fact it is still flourishing today as we speak can you possibly deny that??

Coolmec, Aoun was criticizing Syria during his exile because Syria was still occupying Lebanon. Im not crediting Aoun with accomplishing anything other than resisting an occupying force when they were actually, you know, occupying the country. Which is still much more than the February 14 puppets who were Syria's staunchest ally during the occupation but suddenly found their courage when Syria left.

Karim, wasn't it Hezbollah that had a demonstration in support of the Syrian army presence in Lebanon in 2005 ? the same Hezbos that Aoun always backs.

Ladies and gentlemen, seated at the left we have Mr. Ten Percent, and seated at the right we have Mr. Bingo. One is M14, the other M8, wou 3ish ya sha3b el Lebneneh, since this is all we can get. Wlak ya jame3a, we have good people a lot better than this old stock,what is worng with us, can't we just say we want demyanos, or Ziad or Boutros? What is it that scares us and forces us to stay with the old furniture. Ya 3ammeh, ma badnah wala 14, wala 8. Yalla, 3al beyt.

riad salemeh is the next president