What are the 'Price Tag' Attacks that are Sweeping Israel? 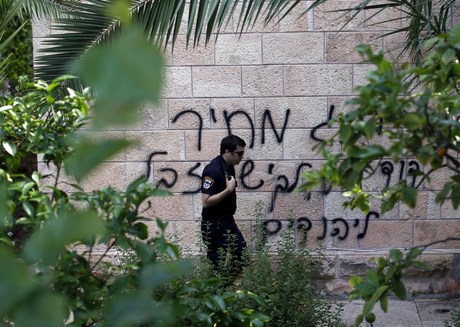 Below are four key questions about the wave of anti-Arab hate crime sweeping Israel.

- What are 'price tag' attacks?

In 2008, far-right Jewish settlers and other extremists adopted a policy of attacking Palestinians and their property in the West Bank in order to exact a "price" for state moves to take down illegally built settler outposts.

What began as a marginal phenomenon against Palestinians has since expanded considerably and spread across the Green Line into Israel, where it has become a much more widespread expression of hatred against non-Jews, but also against Israelis seen as hostile to the settlement enterprise.

Such attacks, with their trademark offensive Hebrew graffiti, take place at night and tend to involve damage to vehicles, the destruction of olive trees, and arson attempts, mostly against mosques although Christian churches and cemeteries have also been increasingly targeted.

Private homes and Arab-run businesses have also been "tagged", along with occasional attacks on Israeli police and soldiers over their involvement in taking down settler outposts.

- Who are the 'price taggers'?

Those behind the attacks are believed to be Jewish extremists, most of them aged under 18.

Police say the fact that most of those arrested are minors has complicated the juridical process, with the justice ministry refusing to say whether anyone has been successfully prosecuted.

Security officials believe the attacks are the work of 100 or so far-right activists from Yitzhar, the most extreme settlement in the West Bank, Haaretz newspaper reported.

They are understood to be disciples of Yitzhak Ginsburg, an American-born rabbi who runs a Jewish seminary (yeshiva) in Yitzhar and who won notoriety for writing a book condoning the killing of non-Jews.

Others are sympathizers of the late Meir Kahana whose virulently anti-Arab Kach movement was outlawed over incitement to racial hatred after one of his followers, Baruch Goldstein, massacred 29 Muslim worshipers at a Hebron mosque in 1994.

- Why have the attacks increased?

Over the past month, the number of attacks has spiked after police took down a handful of illegally built structures in Yitzhar, prompting major clashes with the residents -- and a significant uptick in "price tag" attacks.

Figures quoted by the press indicate there were 16 attacks in April alone, compared with 17 in the first three months of the year.

Five of them targeted Christian holy sites inside Israel, with Israeli security chiefs reportedly concerned that extremist elements may step up their campaign ahead of the pope's arrival on May 25 as a way of drumming up media attention.

While police acknowledge there has been an increase in attacks on Christian and Muslim sites, they have been cautious about directly linking it to the pope's visit.

- What is Israel doing about it?

Although police have made scores of arrests, there have been no successful prosecutions for "price tag" attacks and the government has come up under mounting pressure to authorize the Shin Bet internal security agency to step in.

Attempts to classify such incidents as "acts of terror" were turned down in 2011 and 2013, although the security cabinet did increase the powers of the security establishment to crack down on such offenders by declaring them members of an "illegal organization."

Ministers are expected to table a new request to reclassify such attacks in the coming weeks.

The failure by Israel's vaunted intelligence and security services to clamp down on "price tag" violence has been harshly condemned, with commentators from across the spectrum questioning the government's willingness to tackle home-grown extremism.

At the end of April, the U.S. State Department for the first time included "price tag" violence in its 2013 Country Reports on Terrorism, in a move condemned by Israel police.