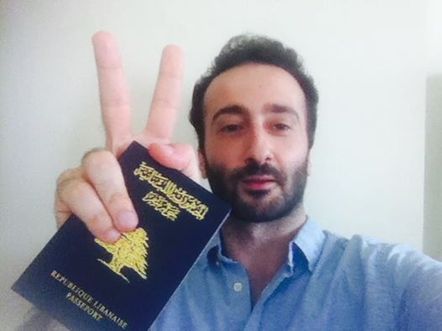 The General Security returned on Friday the passport of filmmaker Lucien Bourjeily, which was confiscated when he submitted it for renewal on Wednesday.

Bourjeily dropped his passport at the General Security on Wednesday to renew it before a planned trip to London, where he is supposed to present his play “Vanishing State” at the LIFT Festival.

But the confiscation almost prevented him from heading to the United Kingdom.

"This is your victory… over submission… over tyranny and oppression and silencing free speech activism,” Bourjeily said on his official Facebook page after he got his passport back.

"It is indeed this huge public opinion pressure that made them go back on their decision 48 hours later,” he added.

The controversial filmmaker stated that he has won one “battle.”

"But the fight is not over,” he noted, calling on the people, media outlets and organizations who supported him in the past two days to continue lobbying against what he called violations against (freedom of) thought and expression.

Bourjeily thanked Interior Minister Nouhad al-Mashnouq for “contacting the General Security and requesting the immediate release of (his) passport from arbitrary and unfair" confiscation.

“The Minister promised that during his term in office...no one will again be prosecuted the way I was by General Security and the Ministry is looking into the matter to solve this issue permanently,” his statement revealed.

“Let’s hope that this will be the start of some real positive change in Lebanon,” he expressed.

The passport's confiscation wasn't Bourjeily's first confrontation with the General Security as in 2013, the censors banned his play “Will it Pass or Not?” which criticizes the censorship bureau's practices.

"The reason? - They categorically refused to give me a reason... I pleaded for an answer but they kept refusing to give the reason... they said that we will revert back to you in the coming month or month and a half and they hinted 'you should know why... something that happened in 2013' [sic],” the artist wrote on his Facebook page on Wednesday, after his passport was taken.

He continued: “No SIR I don't know why; I've never been convicted of a crime...Yes indeed now I know why....What a high price we have to pay as Lebanese citizens for Freedom of Expression and in our fight against corruption and censorship....[sic].”

I dont want any other country as a tutor or conqueror. I just want Lebanon to be independent.

Karim, I wouldn't call the General Security Directorate or its director Maj. Gen. Abbas Ibrahim as close to Saudi Arabia. He's much closer to Hezbollah and Iran.

What kind of cheap and ignorant comment is that, whats worse, are the ones who likes ur comment, wtvr ur called, im so u got nothing to do with karim, the head of the general security is an iranian-syrian hezbollah loyalist, your just proving how....you are.

Why are you so one sided, ya aoun got nothing to do with this article, neither that mosquito with the first comment. criticize both, so u can have some credibility. you need medicine, for your eyes.

Karim - You are right, How dare a Saudi Takfiri minister like Mashnouq intervene to have the General Security, which is led by the Hero of the resistance Gen Abbas Ibrahim, return the passport of filmmaker Lucien Bourjeily. And now this Takfiri Mashnouq is going to prevent this type of behavior. Who does he think he is? An unelected militia boss who takes his orders from the representative of God on Earth, the infallible, the supreme leader, the grand miracle of God Khamanei.

where is southern, mowaten, and liethrower to talk about freedom of speech:)

Congratulations Lucien, trust in the pen, it has always been a lot stronger than the sword. Ya 3aybel shoum milla security system 3andna yeh.

@karim : what the hell is the link with Saudi Arabia ? Want to see oppression, have a stroll in Iran where they put people in jail for dancing and stone women to death for staring at men !