Jumblat: Syrian Elections Demonstrated the 'Art of Democracy' to the World 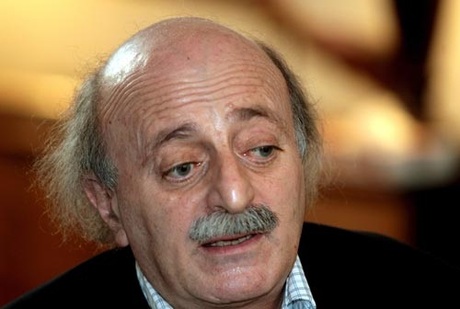 Progressive Socialist Party leader MP Walid Jumblat criticized on Thursday the Syrian presidential elections with a caustic and sarcastic statement, noting the regime's bloody crackdown against the people and the international community's disappointing stances towards the Syrian people.

He said sarcastically: “The regime could have achieved better results in the glittering, diverse, transparent, and democratic elections, had the dead, which exceeded 200,000, and displaced, who exceed eight million, been able to cast their votes.”

“The residents of Homs and Aleppo could have been able to renew their eternal loyalty to Mr. President Bashar Assad were it not for the rubble and destruction in those cities,” he added.

“They would have been able to head to the polls were it not for the corpses and remains of hundreds of thousands of victims, who ironically died for the regime,” he continued in the same tone.

“The residents of the eastern Ghouta and northern Syria would have been able to take part in the elections were it not for the regime's barrel bombs and occasional use of chemical weapons,” remarked Jumblat sarcastically.

“The residents would have been able to teach the West how elections are organized and how free and honest voting is held,” he added.

“The regime would not have been able to stage the most honest elections in the history of mankind had the international community not let down the Syrian people and stood idly by as the they were oppressed, displaced, and bombarded by Assad as part of his preparations for the free, diverse, and democratic elections,” said the PSP chief.

“The Syrian people would not have been able to express themselves with freedom, dignity, and democracy without world powers taking their time in five star hotels in strenuously phrasing the most strongly-worded statements of condemnation,” he commented.

On this note, the MP “proposed gathering these statements and compiling them in the most luxurious book for future generations to use as a reference for phrases of condemnation.”

“What a sparkling election indeed, which radiated freedom and democracy. The election should be used as blueprint for all peoples of the earth,” he added.

“The world should learn the art of elections, voting, the counting of ballots” from the Syrian presidential polls, concluded Jumblat.

Assad was re-elected in a landslide, officials said Wednesday, capturing a third seven-year term in the middle of a bloody three-year-old uprising against his rule that has devastated the country.

Assad's victory was always a foregone conclusion, despite the presence of other candidates on the ballot for the first time in decades.

Voting was held only in government-controlled areas, excluding huge tracks of northern and eastern Syria that are in rebel hands. The opposition and its Western allies, including the United States, have denounced the election as a farce.

really? you find that funny? it's just a paranoid and schizophrenic old man trying to be sarcastic.

Why to keep them guessing?

@patriot I think he Breyer watch himself or he'll be issued another Syrian court order for inciting commence.

If junblatt is really sincere about his sentiments towards the syrian regime, he can easily with his 12 or so MPs tip the balance towards the election of an anti Bashar lebanese president. Talk is cheap

There are about 22 million people in Syria normally. Ten million votes is a mandate, as they say in US politics.

indeed, ten million people went to vote. but hey, that doesnt stick with what the west has been telling us the syrians want. so must be that bashar used 5 million soldiers to force 10 million people to go vote, or maybe they were all hezbollah fighers disguised as syrian citizens... who knows? ;)

Indeed ....
If mowaten said so it must be true (now you have Russia, North Korea, Iran and mowaten confirming it so).

theresistance
Did you blow up all the liquor stored in Tyre and Dahye or did you leave some for those who might want them? You, Iran and HA are a model of secularism and peace.

Defacto, u said it to the tee..kudos man

Ugly from inside and outside.

So M8 commenters are organised in shifts now :) The only muzzling your capable of doing is when you murder your opponents. It's too bad their ideals, visions and words survive their murders.

You know what would survive Hassan Nasrallah's death ? NOTHING except flies and worms. No ideas, no ideals, ...

The Arab Terrorist would like to discuss democracy since his cousin who support the people right to vote are the flag bearers of the peoples choice...In Qatar and Saudi LOL blzzzz tell us more u Hippocrates

Your soooooo block headed. Just bcoz we don't support ur Iranian made militia , it doesn't mean that we support the other types of crazy Muslims ok?

Your right, if the case is we font support ha in Syria fighting, then oh we are labelled ksa supporters or terrorists.

Like kids playing then the jealous kids makes up a story that I like such & such like I like a girl or a teachers pet cause I'm very in class doing my homework & passing my exams.

But that don't mean a teachers pet of I'm smart does it?

The bullying kids throw stones at the opposition school bus. But the smart kids don't but tell the teacher they are doing it. The bullies start naming them names cause not only are the other kids smarter in class but the smart kids are not throwing the stones too.

Yes the kids I'm talking about are the kids that are being bullied by the bullies.

The smarter kids are being called names & are bullied for not doing the same. (ksa supporters or terrorist or zionist) teachers pet or girls etc...

But the smarter kids will succeed because the bullies will be isolated or expelled hence failing their exams.

Or make the smarter kids do their homework for them. Steal their pocket money.....

Illiterate terrorist ? Sounds like the sewer rat u support :)

Sywian democracy is : heads I win tails you loose. Yet we still see these comments trying to justify it. If you all put as much energy into lebanon it would be a much better place